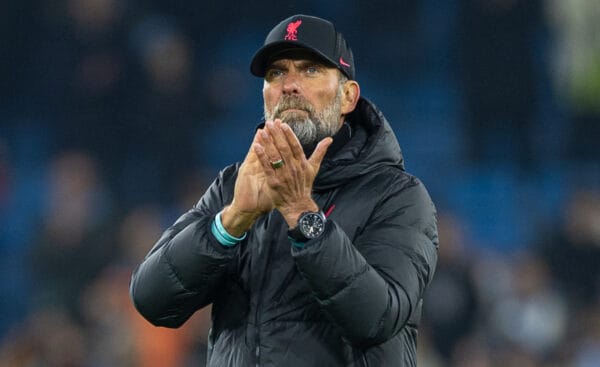 Liverpool FC manager Jurgen Klopp will use his matchday programme notes for Saturday’s game against Chelsea to thank fans for their continuing help in trying to eradicate homophobic chanting.

The Reds’ boss says the role played by supporters in trying to put an end to this type of offensive chanting will allow fans from the LGBT+ community to feel as welcome as they should feel.

Klopp has been vocal on this issue in the past and met with Paul Amann – founder of Kop Outs – to discuss the impact such incidents have on fans from the LGBT+ community, following homophobic chanting at Norwich City in August 2021.

Kop Outs, which is backed by the club, is a fan group that was formed in 2016 to provide a voice for LGBT+ supporters, representing their needs and raising awareness of the challenges and concerns they face.

Now the LFC manager has used his voice once again as his side prepares for Saturday’s 12:30 kick-off against Graham Potter’s Chelsea at Anfield.

In his programme notes for tomorrow’s game he writes:

“With Chelsea being our opponents, it makes sense that I also show gratitude to our supporters for the work they have done in stopping a chant which does not fit in with the traits of our city, our club or our people.

“I will not refer to it by name in this column because I think the less we can hear about it and see it the better but the really, really positive thing is that fans have come together to try to make it a thing of the past.

“We can already feel the effects of this. Positive steps have been made and hopefully this will allow our supporters from the LGBT+ community to feel as welcome as they should.

“This was the message I received when I spoke with Paul Amann from Kop Outs a couple of years ago. He just wanted the chant to stop so that our all our fans could feel more welcome.

Red Together is Liverpool FC’s commitment to equality, diversity and inclusion and brings together the club’s aims to be the most inclusive in football, provide fair opportunities to as many different people as possible, and welcome and meet their needs in the best way possible.

Incidents of abuse or discrimination, either online or in person, can be reported to the club at www.liverpoolfc.com/reportabuse.