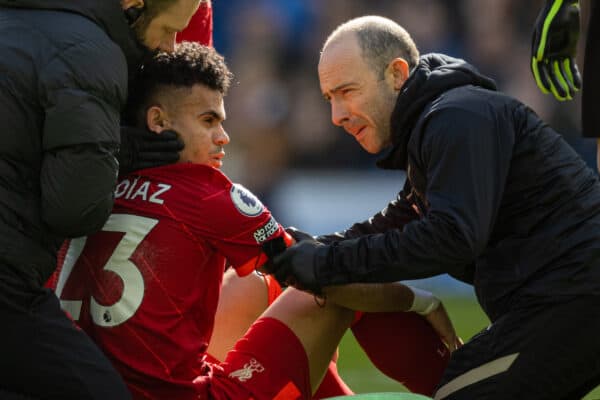 Liverpool were left without a permanent club doctor for five months after the August departure of Jim Moxon, who is now working with Man United.

Moxon took over as the Reds’ first-team club doctor at the beginning of 2020, following Andy Massey’s decision to take up a position with FIFA.

But after serving through an uncertain, tumultuous period with the COVID-19 pandemic, he left the club on the eve of the current campaign, with an announcement made five days before the opener at Fulham.

Since then, Sarah Lindsay and Bevin McCartan had been sharing duties, until the arrival of Jonathan Power as new full-time club doctor this month.

Though Moxon’s decision to leave is unclear, it came amid an ongoing reshuffle of the medical and fitness ranks under Jurgen Klopp.

And in the months since moving on, Moxon has taken up a position with Man United, following long-serving club doctor Steve McNally’s decision to join PGMOL.

Moxon has been working alongside McNally since December, as announced by the Manchester club, and will act as interim club doctor when McNally vacates his position this month.

Of course, club allegiances play little part in staff members taking up jobs beyond the most high-profile roles such as manager and assistant manager.

More interesting is Moxon’s motivation to leave Liverpool just before the campaign was due to get underway, having travelled with the first team throughout pre-season, including days previous.

There are suggestions of unrest as changes are brought in behind the scenes, only magnified now by the owners’ decision to seek investment and even a potential sale of the club.

The existing structure appears to be shifting, with more emphasis on Klopp and his core staff, at a time when regeneration is required on the pitch and stability off it.