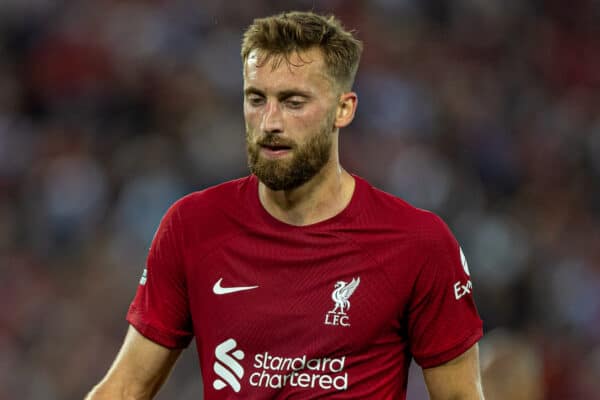 The knock-on effect of Virgil van Dijk‘s hamstring injury could see Nat Phillips denied a move away from Liverpool, though there are two alternatives.

It is a recurring theme for Phillips, who has cemented himself as a dependable figure for Jurgen Klopp but in the role as fifth-choice centre-back.

The 25-year-old is linked with a move away from Anfield every six months, but more often than not, an untimely injury to one of Klopp’s matchday regulars rules any exit out.

That could be the case this January, with Van Dijk visiting a specialist on Wednesday to determine the extent of a hamstring problem suffered against Brentford.

Sources from the club described the injury as “worse than first feared,” and though no timeframe has been set at this stage, there are already fears he could miss an extended period.

If that is the case, then Phillips will almost certainly be retained, having already made the squad for 22 of the 26 games Liverpool have played so far this season.

He will serve as backup to Ibrahima Konate, Joel Matip and Joe Gomez, all of whom have suffered fitness issues in the past, with Konate and Matip missing chunks of the current campaign.

Phillips is likely to take a professional approach to the situation, having put aside any disappointment over failed moves to the likes of Bournemouth, Southampton and Benfica heading into 2022/23.

But could there be another solution that would allow the ex-Bolton youth to seek a move that would offer him the regular starting spot he deserves?

In short, yes – having already happened this time last year.

When Phillips was allowed to join Bournemouth on loan at the end of the January transfer window in 2022, it came as Rhys Williams returned from a failed spell with Swansea in the Championship.

Williams only made seven appearances for Swansea in the first half of last season, before taking up a squad role back at Liverpool that, due to fortune in the fitness stakes, only required him to sit on the bench twice.

Similar could play out this winter, with Billy Koumetio due to be recalled from a frustrating stint at Austria Wein.

Sporting director Manuel Ortlechner confirmed this week that it was “99 percent” certain that Koumetio would depart Vienna, explaining that Liverpool “would like to bring [him] back.”

Another option would be academy defender Jarell Quansah (pictured right), who has been tipped to depart on loan himself this month but has already been given first-team experience by Klopp.

Either Koumetio or Quansah could ostensibly fill that reserve spot in Liverpool’s centre-back group, though it remains to be seen whether the manager would trust them yet.

Much will depend on the results of Van Dijk’s scan and the progress made in his recovery, with Phillips potentially needing to wait until deadline day before any decision is made, again.

But in all likelihood, it will be another five months with Liverpool for the No. 47.