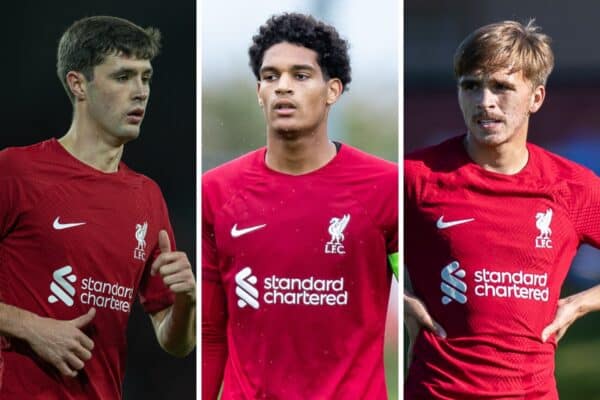 Liverpool are expected to sanction more loan moves for their young players this month, with speculation over three and plans for another confirmed.

With the January transfer window now open, we are already seeing movement in terms both ins and outs at Anfield.

Cody Gakpo has arrived from PSV Eindhoven, while the club are in the process of recalling Billy Koumetio from Austria Wien as they weigh up another loan exit.

Koumetio is one of 17 players who left Liverpool on loan in the summer, and that number is only likely to increase according to GOAL‘s Neil Jones.

Jones reports that Layton Stewart, Jarell Quansah and James Norris could all depart on temporary deals in January, with the Football League a realistic destination.

Stewart made his first-team debut in the Carabao Cup win over Derby in November, with Quansah also making the bench before travelling with the senior squad for their mid-season training camp in Dubai.

Meanwhile, left-back Norris has been a staple of the academy for years and is often called up to first-team training when numbers are short.

They are among the most senior players in the under-21s squad, and it stands as a logical next step for them to gain experience elsewhere in the second half of the campaign.

Any move for Quansah, though, could rest on the fitness of Virgil van Dijk, the future of Nat Phillips and the prospect of Koumetio staying on Merseyside for the rest of the season.

Liverpool are also seeking a loan club for goalkeeper Liam Hughes, who was part of the Reds’ pre-season squad in Germany but has not featured at all at academy level this term.

In an interview with the club’s official website last month, U21s goalkeeping coach Mark Morris discussed the situation around those currently out on loan and their efforts to send Hughes out, too.

“Young goalkeepers have to learn the game and that’s why we try to get them out on loan so they can get out and see what it’s like,” he explained.

“Obviously we have Marcelo Pitaluga, who is having a great season on loan at Macclesfield, Vitezslav Jaros has done extremely well at Stockport County.

“Kuba [Ojrzynski] is not getting as much game time as we’d like him to get at Polish side Radomiak Radom but it is a bit of an experience for him being a No. 2 and battling for his position.

“We are also looking at the possibility of a loan for our Irish stopper Liam Hughes when the window opens so he can get out and get some more experience, so we’ll see what happens with that.”