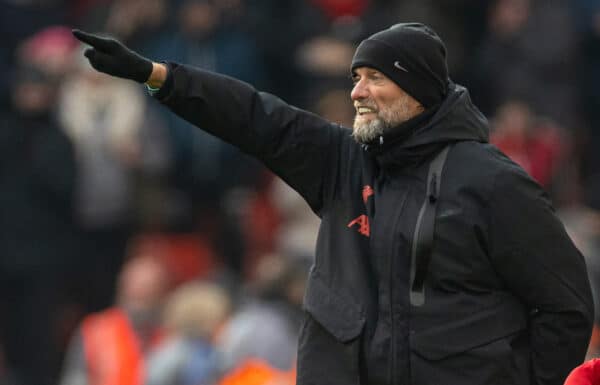 It was back to negative assessments after Liverpool’s goalless draw at home to Chelsea, with familiar shortcomings affecting the Reds.

Jurgen Klopp‘s men could only battle their way to an instantly forgettable point on Saturday afternoon, in a game that was horribly low on entertainment.

Here’s how the media reacted to the Reds’ latest drab showing.

A step back after the midweek win at Wolves…

Richard Jolly of the Independent had to admit that Klopp’s 1,000th game in management was no a classic:

“The thousand club, it transpired, was not a reference to the number of players Chelsea have signed in the Todd Boehly era.

“But as Jurgen Klopp brought up 1,000 games in management, and Mykhailo Mudryk became Chelsea’s latest debutant, it was with an illustration of how two of the dominant forces of recent years are struggling.

“In the bitter cold of these clubs’ bleak midwinters, this was not a good game; certainly not by the standards they have set in the past or compared to some of their epic duels.”

This Is Anfield‘s James Nalton was similarly unenamoured by what he saw:

“Previous incarnations of Liverpool would have fans on edge and entertained throughout the game with their high-pressing, high-line, high-intensity play.

“Current Liverpool have gone for something safer, and in their attempts to be more compact and difficult to break down, they have sacrificed some of that edge-of-the-seat excitement.

“This is no longer heavy metal football. Though there were occasional passages of quick passing, Liverpool also struggle to be a team who breaks an opposition through possession of the ball.

“Hopefully, once they get out of this rut they can start releasing the heavy metal again.”

The Guardian‘s Andy Hunter said a draw was all either team deserved on the day:

“Liverpool and Chelsea played out a flat goalless draw at Anfield that demonstrated why both are languishing in mid-table and struggling to realise their Champions League ambitions.

“Kai Havertz had an early goal ruled out by VAR but otherwise there were few incidents and precious little quality on display from either the hosts or Graham Potter’s visitors.

“The usual stakes in the fixture were lowered with Liverpool and Chelsea 10 points off Champions League qualification in ninth and 10th place respectively.

“The league positions flattered both teams on the basis of a truly dreadful first half in particular, when four minutes of stoppage time in freezing temperatures passed for a cruel joke.

“Chelsea performed with more control and composure, but that was only in comparison to a careless and aimless Liverpool display.

“The game got the scoreline it deserved.”

Cody Gakpo has made a slow start to life at Anfield…

Nalton focused on a frustrating afternoon for the Dutchman, who is still waiting for his first Liverpool goal:

“Liverpool’s new signing had a few opportunities to get shots on target but, demonstrating some tension and impatience, snatched at his chances.

“The first looked like a good chance as Salah played a ball back into the area from out wide. Gakpo got his body shape all wrong, leaning back and skying his shot into the stands.

“It would be unfair to call his second shot a good chance, but nevertheless, his execution of a shot from outside the area can still be judged. He had time to line the shot up and blasted it into the Anfield Road end.

“The power he gets in the shots is encouraging. A bit more composure and consideration of his technique and these shots could trouble goalkeepers from wherever they’re hit.”

“Much was expected of Gakpo following his £45million move from PSV Eindhoven at the start of the window.

“After all, this is one of the stars of the World Cup in Qatar who scored nine goals and provided 12 assists during the first half of the Eredivisie campaign.

“Yet Gakpo’s Liverpool record – which stands at no goals or assists in four games – is starting to worry some critics.

“His performance against Chelsea was nothing to shout about, either, and the pressure could become unbearable if he doesn’t score sooner rather than later.

“For Gakpo’s sake, he needs to open his Reds account against Brighton next Sunday.”

Jolly said it was hard to see either team in the Champions League next term:

“Whether in decline or transition, Liverpool and Chelsea kicked off in ninth and 10th, both ended up nine points off the top four and having played a game more.

“Recent winners of the Champions League are becoming ever less likely to qualify for next season’s competition.”

Finally, BBC Sport‘s Phil McNulty said it would take a big effort from here to finish in the top four:

“The quality of this game was reflected in the subdued atmosphere at Anfield, with the final whistle greeted with near silence apart from some very mild applause.

“Liverpool have made their reputation and based their success under manager Jurgen Klopp not simply on world-class talent but on a searing intensity that has seen teams simply blown away.

“They currently look a shadow of that side in every respect, admittedly deprived of attacking talent such as Luis Diaz, Diogo Jota and Roberto Firmino, and there were very few alarms for Chelsea and no serious work for keeper Kepa.

“Klopp’s side are now nine points off the Champions League places and it is clear they need to find that missing spark – and quickly – if they are to get anywhere near the top four.”