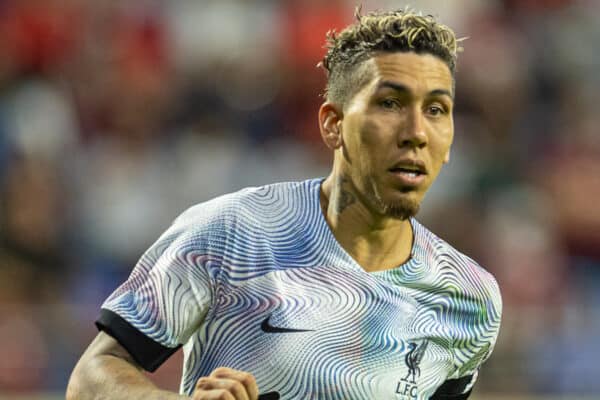 Roberto Firmino is now able to discuss a free transfer with clubs overseas, with Jurgen Klopp hoping he stays despite interest from Saudi Arabia.

Firmino is into the final six months of his contract with Liverpool and, so far, there has been no resolution in talks with the club over an extension.

The latest reports from Brazil claim that the Reds would be willing to offer their No. 9 a short-term deal that would tie him down for one or two years.

But there have been ongoing suggestions that, despite the player and his manager both confirming their desire to agree new terms, a summer exit could be on the horizon.

That is particularly the case amid links with a lucrative move to Saudi Arabia, with Al-Nassr, who recently signed Cristiano Ronaldo, one of the sides said to be interested.

According to Sky Germany’s Florian Plettenberg, clubs in Saudi Arabia are “still pushing” to sign the 30-year-old, but his “clear tendency” is to stay put.

News #Firmino: Clubs from ?? are still pushing but clear tendency now and at this stage: Contract extension with Liverpool! At least until 2025. He wants to continue at the highest level.

“He wants to continue at the highest level,” he adds, explaining that Firmino is seeking a contract “at least until 2025.”

That would suggest that the Brazilian, who is represented by German agency ROGON, wants a two or even three-year extension.

Whether Liverpool are willing to offer him those terms remains to be seen, particularly given the signing of Cody Gakpo and the long-term futures of Mohamed Salah, Luis Diaz, Darwin Nunez and Diogo Jota.

Those five forwards are all committed to the club until at least 2025, with Diaz and Jota both tied down through 2027 and Nunez and Gakpo until 2028.

Firmino may find himself the odd one out, especially when it comes to value, though speaking on the subject after Tuesday’s 1-0 win over Wolves, Klopp reiterated a desire to keep his most-used player.

“I said that before. Yes, I want to keep him at the club, of course,” he replied to one reporter.

No player has featured in more games under Klopp throughout his entire career than Firmino (341), with only Salah (246) directly contributing with more goals and assists combined than the Brazil international (185).

Dortmund duo Roman Weidenfeller (25,156) and Nevan Subotic (25,107) are the only players to clock more minutes on the pitch than Firmino (24,760), who should exceed their total this season.