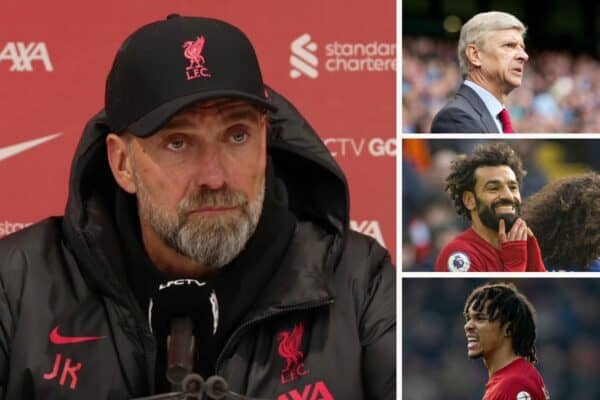 Despite another underwhelming Liverpool performance in their 0-0 draw with Chelsea, Jurgen Klopp told reporters he believes the performance represented “a little step” in the right direction.

A message from Wenger before the game?

This, of course, was Klopp’s 1,000th match in management.

And the boss hinted that Arsene Wenger was among those to congratulate him before the game.

The former Arsenal manager lost his 1,000th game in management 6-0, and despite Liverpool’s lacklustre performance on Saturday, he was relieved the occasion was not marked in quite such a negative manner!

“First and foremost, before the game, I got a lot of messages and not all of them were nice,” Klopp joked.

“It was progress, definitely”

Understandably, there was a lot of frustration among the Liverpool fanbase after the full-time whistle.

Klopp, though, insists the result marks a certain degree of “progress” from his players.

“For me it’s clear. In our situation we have to be ready for little steps, and this was a little step today, that’s how it is,” Klopp said.

“I expect progress, and I think from the last league game it was progress, definitely. That’s important.

“I saw us, in a lot of moments, really compact, really together, good challenges.”

So what do Liverpool need to do to improve from here?

In Klopp’s eyes, the answer to that question seems to be pretty clear.

“We were compact, we won really good balls, we caused them problems,” Klopp said.

“From there, we have to do better with the ball.

“Even Thiago, who is a great footballer, gave balls away, unforced errors, these kind of things. That’s what we have to do better.

“If we do that, if we defend well, play more in these moments, use each other more, all of a sudden it looks completely different. That’s where have to get to.”

The last question of the press conference saw Klopp asked about the importance of keeping another clean sheet, Liverpool’s second in a row.

“Directly after the game, you can’t forget the chances they had, but tomorrow I won’t remember them anymore. It’s just a clean sheet, and it feels really good.

“There are things we have to build on and that’s what we will do.”