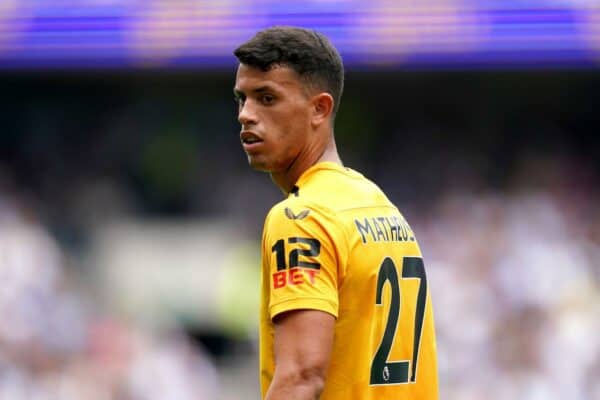 Why Matheus Nunes CAN’T be a January signing for Liverpool

Liverpool’s midfield hunt has seen Matheus Nunes’ name resurface, but despite the clamour for a January addition, he would not be able to play until next season.

On Monday evening, a report from the Telegraph claimed that Liverpool are “exploring a deal” to sign the Wolves man for a fee touted in the region of £44 million.

It is a fraction more than the £42.2 million, inclusive of add-ons, that Wolves agreed with Sporting CP last year, but Sky Sports claim the Premier League side will want more than £50 million.

As for Liverpool’s interest, while the clamour for a midfield signing this month is intensifying, any pursuit of Nunes can only be for the summer as he is bound by FIFA regulations.

In addition to his 16 games for Wolves this season, Nunes also made two league appearances for Sporting at the start of 2022/23, maxing out his two-club quota.

FIFA transfer regulations stipulate that while a player can be registered at a maximum of three different clubs in one season, they can only play official matches for two.

Liverpool could, in theory, sign Nunes in January but there is little to gain and, therefore, would wait until the summer for a player who Wallace states “the club believe has a major future at Anfield.”

Why the club did not act last summer and instead accept having to pay a higher fee if they do return to the bidding table is quite the quandary, as the need was certainly evident.

With Alex Oxlade-Chamberlain, Naby Keita and James Milner out of contract in the summer, the midfield ideally needs three new signings, with Jude Bellingham widely known to be their No. 1 target.

Whether one is signed in January remains to be seen, but Jamie Carragher did not beat around the bush when it came to assessing the club after their defeat at Brentford.

“If Liverpool think they can get top four without signing a midfield player in this window, they’ve got absolutely no chance,” he said in a scathing assessment of the situation.