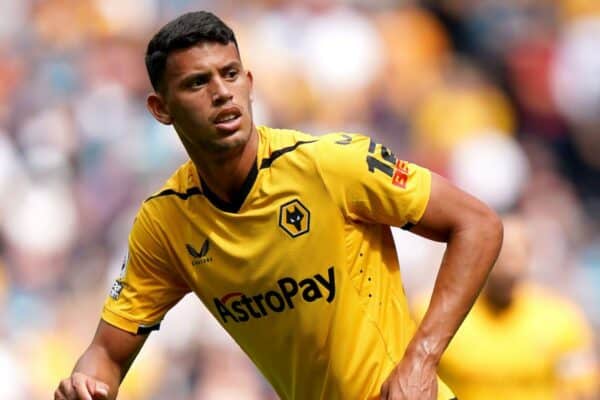 Liverpool are set to uphold a commitment to bid for midfielder Matheus Nunes, with a move to Anfield reported five months after joining Wolves.

Nunes joined Wolves in August, in a deal worth an initial £38 million, after speculation linking the Portuguese with Liverpool.

Though links with the Reds were rubbished by journalists on Merseyside, including the Times‘ Paul Joyce, the Telegraph‘s John Percy maintained that the club were “huge admirers.”

Days after Nunes arrived in Wolverhampton, Percy reported that there was a belief at Wolves that they “may only get a year out of him.”

Now the Telegraph‘s Sam Wallace, with information from Percy, reports that Liverpool are now “exploring a deal” to bring the midfielder to Merseyside.

It is claimed that Nunes “was close to signing for the Anfield club [in the summer] but the transfer did not go through,” and that the Reds “made a commitment to bid for him subsequently.”

“That deal is still very much alive this month,” Wallace adds.

Though there is a clamour for Liverpool to bring in a new midfielder this month, it is suggested that an agreement could be reached with Wolves that would see Nunes switch clubs at the end of the season.

The fee touted is around £44 million, which would be similar to that which Wolves shook hands on with Sporting CP last year, inclusive of add-ons.

Jorge Mendes, the agent with close ties to Wolves and who has been involved in recent deals with Liverpool, would help oversee any transfer.

It is a strange situation, but one that seems to have Mendes’ fingerprints all over it, with Wolves effectively agreeing to a loan deal with Liverpool to pick up the fee in 2023.

Nunes has not made the impact many would have hoped in his first months at Molineux, but that has largely been due to injury and the lack of stability in the dugout.

Wallace maintains that, with regards Liverpool, “the perspective has not changed that this is a player whom the club believe has a major future at Anfield.”

Quite how this would affect any pursuit of Dortmund’s Jude Bellingham, who is widely reported to be the priority midfield target for Jurgen Klopp, remains to be seen.

But it is likely that the German will need to bring in at least two new midfielders, with Alex Oxlade-Chamberlain, Naby Keita and James Milner all currently due to depart on a free transfer in July.