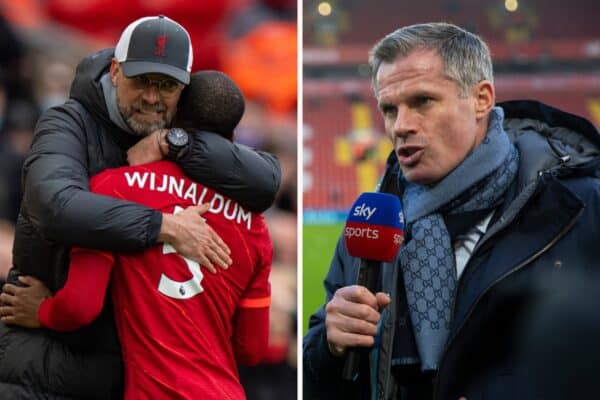 Jamie Carragher believes Liverpool will not finish in the top four without signing a midfielder in January, and that they “need to go big in the summer.”

Carragher was scathing – and accurate – in his assessment of Liverpool’s 3-1 defeat to Brentford on Monday, as he picked apart the situation on Sky Sports.

The former Reds defender argued that “it’s not a Jurgen Klopp team” taking to the field now, speculating that Pepijn Lijnders‘ influence has prompted a shift from physicality to technical ability.

For Carragher, and the majority of supporters, the big problem lies in midfield, where, as he points out, there has only been one significant signing since 2018.

That was Thiago, who has effectively taken Gini Wijnaldum‘s place as left-sided midfielder but has struggled to compensate when it comes to the Dutchman’s off-ball work.

Jamie Carragher believes Liverpool need to spend a LOT of money in the transfer window ? pic.twitter.com/4WOUdEGyYl

“People keep talking about Bellingham – and rightly so, he’s going to be one of the best young players in world football,” he said.

“But for me, what is maybe as important as a Bellingham-type, if you can get him, would be a Wijnaldum-type.

“That type of player who, alongside a Fabinho, can actually just protect that back four and stop players running through towards that defence.”

Carragher added: “No matter how good you are as a defender, if you haven’t got protection in front of you it’s very, very difficult.

“I go back to the best centre-back I think I’ve ever seen in my life, it’s Franco Baresi, but he had an unbelievable midfield in front of him, in terms of Ancelotti, Rijkaard, those people doing jobs in front of him.

“No matter how good you are as a centre-back, you need protection. If you don’t get protection, you’ve got no chance.”

It is not as simple as signing one midfielder, either in January or the summer, with Carragher of the belief that Liverpool need to bring in three more players to the tune of £200 million.

“Liverpool are going to need to go big in the summer,” he said.

“You think of what Chelsea and Manchester United spent in the summer and they’re still not close to winning the title.

“So it shows you the sort of funds that you need to compete at the top of the league.

“Liverpool, year in, year out, have sort of sold someone, bought someone, but I think this is a case of now Liverpool need to spend £200 million.

“And I’m not saying that in terms of that’s the secret to success, because there have been lots of teams who have spent lots of money and it doesn’t necessarily work.

“But Liverpool need to sign three midfield players, I would say.

“Not necessarily all to play, but Keita, Oxlade-Chamberlain are both out of contract, so is James Milner, [and with] the age of Thiago who is injured quite a lot, Henderson, Fabinho, I think Liverpool need three midfield players.

“When you’re talking about real quality, you’re looking at at least £40, £50 million for those types of players.”

Shortly before kickoff at Brentford, it emerged that Liverpool are considering a move for Wolves midfielder Matheus Nunes, who is valued at around £44 million.

That deal, the Telegraph report, would be lined up for the summer, but Carragher believes another midfielder needs to come in now if Liverpool have ambitions of qualifying for the Champions League.

“How has this been allowed to happen, and the fact that Liverpool didn’t sign a midfield player in the summer?” he asked.

“Liverpool have signed Gakpo now. If Liverpool think they can get top four without signing a midfield player in this window, they’ve got absolutely no chance.”