Liverpool travel to Lisbon for the first leg of the Europa League quarter final against Benfica on Thursday night. Our friends from Zonal Marking blog recently analysed the Portuguese side and pondered, are they the most attractive side in Europe?

IS there a side in Europe at the moment that plays more attacking, exciting football than this Benfica side? With two forwards, three attacking midfielders and two extremely offensive full-backs, the side is packed with creativity and energetic runners, making them extremely difficult to defend against.

The best thing about the side is that it features two of World football’s forgotten talents, in Javier Saviola and Pablo Aimar; two slender, skilful No 10s from River Plate, who never went onto achieve what they promised upon their initial arrival in Europe. Portugal is probably the best league to play in if you’re this sort of player – it’s open, attacking and features a lot of poor defences.

The side essentially plays with a diamond in midfield, although with the carrileros so attacking, and with Javi Garcia sitting very deep in front of the back four in a role similar to the one Pep Guardiola played at Barcelona, the side is perhaps best described as a 4-1-3-2, and in that respect is relatively similar to the great Czech side of Euro 2004. Like that side, the offensive slant of the midfielders is compensated for by the fact that the two carrileros are very energetic, and work hard to get goalside when Benfica are not in possession. Indeed, this is a good example of how to play the diamond shape – Di Maria and Ramires play from inside to out, and are comfortable scrapping in midfield as well as getting to the byline and getting crosses in.

Cardozo plays as a classic prima punta – he likes recieving crosses and he’s a physical presence, whereas Saviola tends to play ‘around’ him, either dropping deep or drifting to the wing. When he does the former, and links up with the midfield, he and Aimar create a double trequartista threat that is extremely difficult to defend against, and effectively becomes a Christmas Tree formation similar to when Milan used two playmakers. 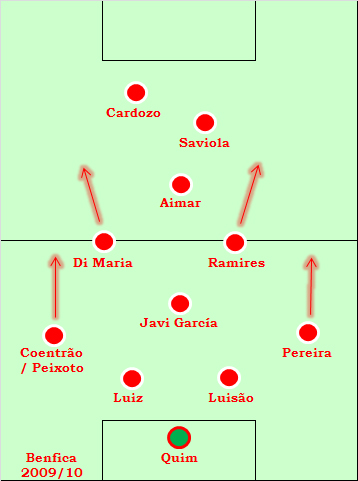 The attacking intent is summed up by the players who play at full-back, as both positions are filled by players who started as wide midfielders. On the right, Maxi Pereira lacks the pace or skill required to be a constant attacking threat, but is more comfortable at full-back than on the right of midfield where he played last season. The opposite side sees more technical quality – the two Portuguese players, Cesar Peixoto and Fabio Coentrao are both listed on most squad lists as midfielders, but fill in well at left-back.

As ever in attacking sides, the holding midfielder is crucial, and Javi Garcia’s first season in Portuguese football has been a huge success. A classic Iberian midfielder, his passing is excellent and his defensive ability owes more to intelligent positioning and reading of the game rather than crunching tackles.

Credit should go to both the manager, Jorge Jesus, for getting the team to play well in such an adventurous shape, as well as Benfica legend Manuel Rui Costa, now Director of Football, and responsible for the transfer policy which brought in such great players.

The one criticism of the side, which may be their downfall in the Europa League, would be the lack of flexibility. They do have a decent squad, but one wonders if two upfront will continue to work away from home. Playing Carlos Martins, another central midfielder, may be a useful tactic – but which of the forwards would you drop? Perhaps Aimar would be the one to make way. Nevertheless, they remain well-suited to the Liga Sagres – interestingly, every player in their squad is either Iberian or South American.

As always with Portuguese sides, there’s a threat of the team being broken up in the next transfer window, with Angel Di Maria looking to leave and Ramires set to be on show at the World Cup. Let’s hope this side wins at least one trophy this season, because they are a great demonstration of how football should be played.

It is worth pointing out that, though, in ‘big’ games they often drop Aimar and play Carlos Martins, slightly more defensively aware but packing a great long-range shot. The shape becomes more of a 4-4-1-1 with Saviola behind Cardoso. They’ll almost certainly do that at Anfield, we’re not too sure about in the first leg…