Second String Review is a compilation of match reviews, interviews and player development updates as well as profiles and biographies of all the players who you don’t see every Saturday!

As previewed in the last edition, Liverpool under 18s took to the field with a strong looking lineup as they faced Notts County in the FA Youth Cup. County headed into the game in impressive form having not conceded in their two previous outings…

Liverpool took the field as strong favourites and did exactly what was required of them as they produced a good performance to see off the challenge of the lower league side Notts County.

Liverpool took the lead early in the first half when a sustained period of pressure ended in the impressive Krisztian Adorjan, whose guile and ingenuity had been missed during the early part of the season when he was injured, found the net. The Reds should have scored more with chances being spurned by Sterling and Suso in particular.

Michael Ngoo effectively ended the tie when he doubled the lead just before half time. The big striker has made the move to the reserve side this year and was clearly relishing his return to Academy football as he also added the fourth goal following Raheem Sterling’s stunning had made it 3-0.

Overall, an impressive win for a strong Liverpool side who clearly benfitted from the added experience of the likes of Flanaghan, Robinson, Suso and Ngoo.

Future Stars – The Players of Tomorrow 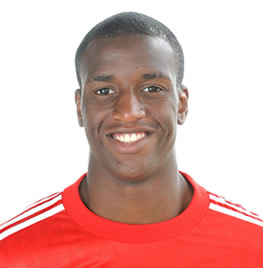 Leggy forward Michael Ngoo joined Liverpool from Southend United in the summer of 2009, rejecting Manchester United’s advances in the process.

Since then, Ngoo has drawn admiring glances from any that have seen him as his clumsy style belies his true ability. A natural footballer, he easily drifts past defenders and makes powerful runs which are difficult to stop, indeed it is his awkward style which makes him so unpredictable. Michael loves to get to the by-line and drag the ball across the box, making him the perfect foil for a more natural finisher – something the departed Lauri Dalla Valle found most useful.

Although not regarded a goalscorer, Ngoo does get his fair share of goals, famously notching a brace in the 5-1 defeat of an excellent Leicester City team at the Walkers Stadium.

Since making the step up to the Reserve side in 2010, Ngoo has once again impressed, proving to be a talented target man, which has allowed Nathan Eccleston to thrive and therefore get his chance in the first team.

Michael Ngoo has the world at his feet and is only limited by his own aspirations. If he continues to show ability and improve day on day then there is little reason to doubt his eventual progress into the first team fold.

Main attributes: Technically sound footballer who can very effectively dribble the ball. Good hold up man, rarely gives the ball away.
Main weaknesses: Could his awkward style work against him in the eyes of the coaches?
Comparable Players: Peter Crouch, Emmanuel Adebayor

Verdict
Current Ability: 4/10
Potential Ability: 8/10
What level could he play at? He could become a quality squad player, but perhaps he doesn’t score enough goals to be a regular.

David Mannix – Interviewed in 2008 upon signing for Accrington Stanley

David Mannix, former Reserve team captain, was famed for his never-say-die attitude and match winning performances. Despite his slender frame it was widely expected that Mannix would progress into the first team and he might well have done if it were not for a string of unfortunate injuries…

“At Under-15/Under-16 level David was such a shining light in central midfield. He is a very strong but gifted midfield player. But for his injuries he would be playing regularly for the reserves and making tremendous progress towards being the next Academy player through to the first team squad.” – John Owens

However, the final nail in the coffin for Mannix proved to be an injury sustained while on loan to Accrington Stanley. Shortly after, he was released and joined Norwegian side Ham-Kam, making 13 appearances and helping them to promotion to the first division of Norwegian football before heading back to England and Accrington Stanley for the second half of the 2008 season. Mannix impressed with Stanley and moved on that summer to now extinct League 2 side Chester City where his career got off to an auspicious start as he was submitted to hospital with facial injuries after a training ground incident; however he recovered from his injuries and regained his form to fight back into the team.

Then, the lowest point of Mannix’s career happened as he was banned from all football for 10 months because of a bet he placed on Chester City losing their last game of the season, against Bury.

After the ban ended he had trials with Morecambe and Unterhachting in Germany but eventually signed a deal with Vauxhall Motors in October 2010, scoring on his debut against Newcastle Town.

Now that Mannix has finally settled, he can hopefully begin to reproduce the form that made him the country’s hottest property at 15.

Thanks for reading the third issue of Second String Review, as always, if you would like to leave comments they will certainly be added.

There are no matches next week for either the Academy or Reserve team, but we will be looking at our talented full back Jack Robinson and remember former Reserve team player Ryan Flynn.