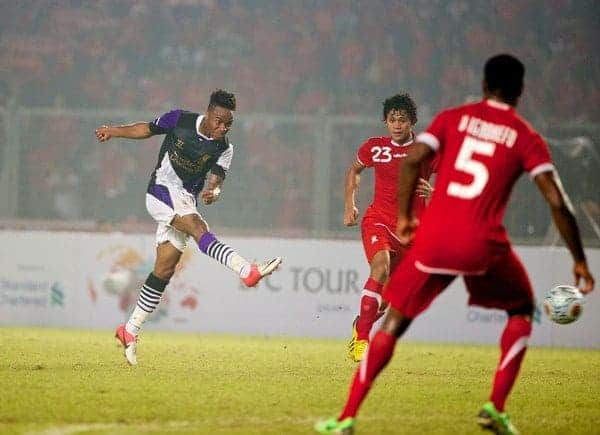 Liverpool were given a stern pre-season test on their visit to Indonesia on Saturday evening, but ran out 2-0 winners to claim their second victory of the summer.

Almost 90,000 fans buzzing and passionate fans turned out for the game at the Gelora Bung Karno Stadium, bringing with them banners, flares and a euphoric rendition of You’ll Never Walk Alone as the players took to the pitch.

Brendan Rodgers named a strong line-up, giving the local fans a long-awaited glimpse of their heroes. It was the club’s first ever trip to Indonesia. Steven Gerrard started to make his first appearance since undergoing shoulder surgery at the back end of the 2012/13 campaign.

Brazilian Philippe Coutinho got the Reds off to a good start, first finding some luck when the ball ricocheted off an Indonesian player back into his path, before taking the ball in his stride, into the penalty area and finishing cooly under the keeper for Liverpool’s first.

The Indonesians made it hard work for Liverpool and despite a couple of exciting moments from Iago Aspas up front, the state of the pitch took its toll on the Reds attacks.

Substitute Raheem Sterling rescued a second for Liverpool in the second half to seal the victory. He tucked away into an empty net from Oussama Assaidi’s pass.

The victory adds to Liverpool’s 4-0 win at Preston North End last weekend, but it wasn’t a pretty one.

Next up is Melbourne Victory and a first chance for Liverpool fans in Australia to see the club. A sell-out crowd of almost 100,000 fans awaits Gerrard and co at the Melbourne Cricket Ground.