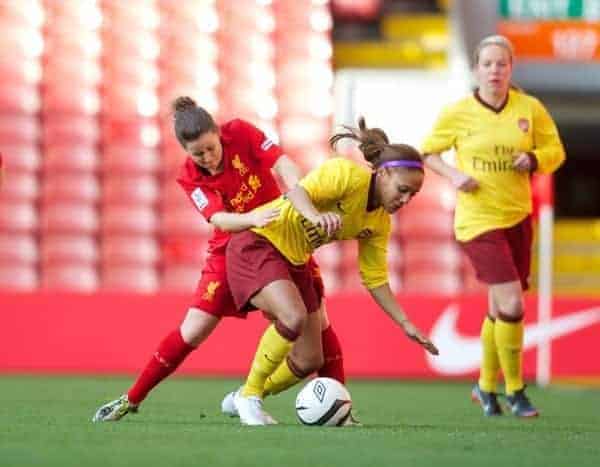 Liverpool’s Ladies team lost only their second game of the season on Saturday evening, going down 3-0 to Arsenal Ladies at the Halton Stadium in Widness. In their first game since the Women’s Super League resumed following a summer break, Matt Beard’s team looked out of focus and under-par throughout.

Having celebrated Steven Gerrard’s testimonial at Anfield earlier in the day, entry for the Ladies game was made free to holders of a ticket from the testimonial or season tickets.

Despite making four summer signings, the Ladies took the field with a familiar line-up. Sarah Gregorius was the only newcomer to make it into the squad – and started on the bench.

Jordan Nobbs was on hand for an easy tap-in for Arsenal‘s first, before England international Alex Scott made it two for the North Londoners before half-time.

Nobbs scored a scorcher of a goal 12 minutes from full-time to wrap up the victory for the visitors.

Arsenal‘s victory has claimed revenge on Liverpool, who thrashed the Gunners 4-0 at the Emirates Stadium earlier this season.

Liverpool hadn’t lost since playing Chelsea in May, but remain top of the WSL on goal difference.

League table as of 3 August 2013 – compiled by LiverpoolLadiesFC.com.

Next up the Reds face Lincoln Ladies in the FA WSL Continental Cup on Wednesday 7th August 2013.

The game was the first Women’s Super League game to be shown live on new sport TV channel, BT Sport as they take over from ESPN‘s rights package for WSL games.