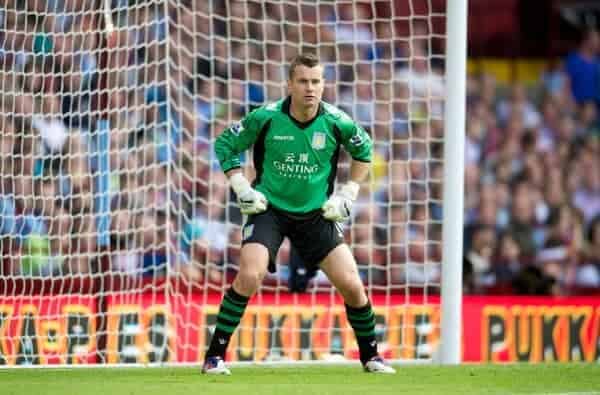 Liverpool are closing in on a deal to sign Republic of Ireland goalkeeper Shay Given, according to reports on Thursday night. The Reds are reportedly hoping to clinch a deal for the 37-year-old from Aston Villa to act as backup for Simon Mignolet, ahead of the current second choice keeper, Brad Jones.

Liverpool have made a surprise move for the veteran goalkeeper Shay Given as Brendan Rodgers seeks experienced cover for Simon Mignolet.

Given had been linked with a move to Doncaster earlier this summer but that switch failed to materialise and he has remained at Aston Villa, even though he has been told by Paul Lambert he has no future at the club.

Whilst the Mirror also carry the story, suggesting Rodgers hopes Given can mentor 25-year-old Mignolet, who has so far kept clean sheets in both of his opening league games for Liverpool.

This has alerted Rodgers and the Anfield giants are now investigating the possibility of buying Given for a nominal fee.

Given began his career at Blackburn Rovers back in 1994, before signing for Newcastle Utd in 1997, where he made over 350 Premier League appearances and became a hero in the North East.

After Newcastle‘s struggling years in the league, Given left St James’ Park for Manchester City, however the emergance of England goalkeeper Joe Hart forced him to take a back seat.

He signed for Villa in 2011, but has now lost his place in the matchday squad under Lambert.