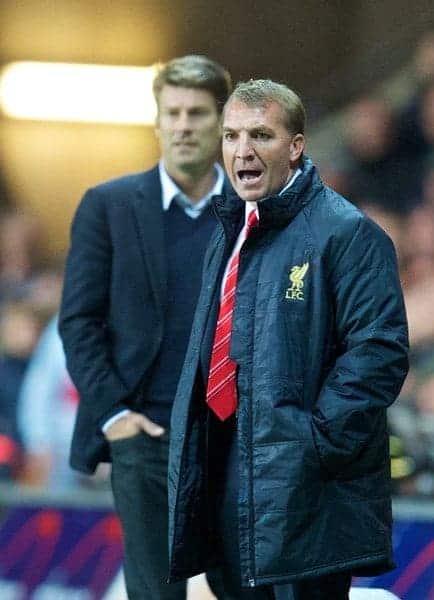 Brendan Rodgers has bemoaned Liverpool’s finish to their game at Swansea on Monday night which saw them lose a 2-1 lead to only take away a point from the Liberty Stadium. The Reds returned to the top of the Premier League, but will feel disappointed to have not held on for all three points after earlier turning around a 1-0 deficit.

A 64th minute Michu goal followed by an onslaught of Swansea attacking for the final 25 minutes turned the game in the home side’s favour after goals from Daniel Sturridge and Victor Moses had given Liverpool a first half lead.

However, Rodgers was quick to take the positives from the game, saying the Reds showed character to hold off a wave of late Swansea pressure to hold on for the draw.

“I thought for the first 65 minutes we were very good,” Rodgers told press after the game.

“Probably no-one knows the stadium as well as I do here and what the crowd are like when the momentum gets up – so we showed incredible character to get back into the game so early after they had scored.

“We had done some work on the counter-attack and flooding forward, because we knew there were going to be spells in the game that we wouldn’t have the ball. We exploited that quite well for the second goal.

“Until 65 minutes, we had good control. We’re disappointed with the second goal that we gave away; obviously then the momentum changes into Swansea’s hands for the last 20-25 minutes.

“Then we’ve got to show another side, especially when you’re away from home, of character and resilience. And we did that. Make no mistakes, we’ve got a lot of improvements still to make.”

The turning point in the game almost coincides with the substitution of attacking magician Philippe Coutinho, who was replaced by Iago Aspas due to injury shortly into the second half.

Liverpool's final third passes before and after Coutinho was subbed off on 55 mins (48 completed before, 4 after) pic.twitter.com/XWJClPHo7f

Liverpool now return to Merseyside as league leaders with the visit of Southampton to Anfield on Saturday, before a League Cup fourth round tie at Manchester United four days later.