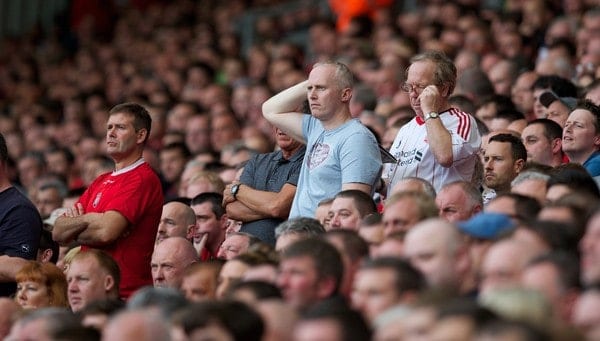 Karthikeya Ramesh looks at positive problem solving for Liverpool in the wake of their first defeat of the season. As Liverpool’s unbeaten start to the season came to an unceremonious end at Anfield, my mood was one of quiet acceptance. Not rage, not frustration, not even resignation, just deflation. No teeth-gnashing, no howling. We lost. Get on with it and stop brooding.

Let’s face it, this streak had to end sometime. We all knew that Liverpool would sooner or later lose a match. But the foundations for a sustained run of success have been laid – a winning formula has been discovered (no matter how shaky or tenuous): we have a consistent striker, the best goalkeeper in the league and a hard-working midfield trio. We also have a defence that, for all the chopping and changing, has conceded just 3 goals in 5 league matches. We’ve probably had all these for years (substituting Mignolet for Reina), the difference is that now this talent and effort are being translated into three points.

Of course, that does not make this defeat any easier to swallow, and I see several questions manifesting as fellow Reds grope for answers. None of this was foreseeable a week ago, when a very confident Liverpool headed for Swansea after the international break, fresh after four wins – the last coming against Manchester United at Anfield. Two matches later, I’d urge restraint.
It is possible, however, to pinpoint a few talking points and areas Liverpool lack noticeably (and others, not so noticeably).

“Liverpool never deserved to lead the table. We got lucky.”

This is the point I’ve heard most often over the last two days. It is without doubt the strangest, all the more so, because it isn’t from United or Arsenal fans : it is Reds themselves who’ve been emphasising this opinion all over my Twitter and LinkedIn feed, even before the Southampton match. I’m frankly baffled – the Kop is renowned for its understanding of the finer points of football, but, with all due respect, such a wide-ranging surge of pessimism is uncalled-for.

To put things in perspective, we are hurting because we’ve seen a good start halted after injuries to key personnel. Perhaps because it’s only our 2nd home loss in 2013; perhaps because we haven’t lost home or away in 14 matches, since well before the Suarez suspension. This defeat has left us feeling voided because defeats are rare. And that actually indicates a good trend.

I will stick my neck out here to defend Brendan Rodgers on his strategy of pressing for a lead and then switching to defence. He’s making us harder to beat. Unless it is prompted by performances issues like stamina, I’m quite fine with playing for the scoreboard. This result-oriented mentality is not only welcome, it’s long overdue. It’s time this time started challenging for wins regularly, rather than staying content with an isolated hammering of Norwich or Newcastle. Those criticising this change of mentality quite possibly hail from the same crowd that was dissing the team for not being mentally strong and often letting slip 2 points till last season.

Good teams are not those that play their opposition off the park; it is those that get the points at the end of the day. Football is, whether we like it or not, mostly about the 3 points these days. It is not a sink for romanticism; it is a results-oriented business, where the players are professionals who need to get the result sewn up first and foremost.

The answer to this is equally straightforward. In his nine months at Liverpool, the Brazilian has unquestionably become our creative fulcrum. Even when he isn’t scoring or assisting goals, he is our most dangerous midfielder and the one most likely to start an attack. The impact of his departure was visible in the last half an hour against Swansea and the entire match against Southampton: Sturridge was forced to sit deep, and had to start attacks as well as climax them. The midfield in turn was forced into a defensive shape.

Coutinho is the principal reason why we’ve been able to play ten matches without Luis Suarez, losing just this once and winning 7 times. This team is clearly a cohesive unit that has developed multiple focal points across the pitch. That said, the Uruguayan’s imminent return in the League Cup tie against Manchester United could not have come at a better time: with Philippe Coutinho injured and Alberto still a novice. To lend the midfield weight and passing ability, Steven Gerrard is forced to play deep – too deep to have any direct impact on the scoreline. A Suarez return would be as welcome as the proverbial manna in the wilderness.

Did we deserve to win the Southampton match?

A resounding ‘no’. And Southampton in turn fully deserved their win. Which brings us to the point : why, if we have pedigree, did we not win?

At the risk of repetition, our wins in the first 3 matches were not flukes. Yet, the euphoria allowed us to forget all too easily that Liverpool’s strategy still rests on a few basic pillars. And Glen Johnson is one of them. Against Swansea, as an inexperienced Andre Wisdom was repeatedly buffeted by wave after wave of Swansea attack, we realized all too often how crucial the England right-wingback’s role is.

It may sound like an exaggeration, but 5 points have possibly been dropped because of Johnson’s absence. It has unsettled the defence while robbing us of an aggressive forward thrust; Kolo Toure is experienced, but lacks the verve and versatility of Johnson. Against Manchester United Johnson was immense, battling with Patrice Evra (in turn United’s best player on the day) and creating multiple chances. He forced the corner that led to Liverpool’s goal. In possession, he is clear-headed, attacks with speed and precision, and possesses a powerful long-distance shot. In defence, he has vastly improved his tracking back.

Of all the other talking points, none mattered to me more than the penalty not awarded to Sturridge, which provided plenty of fuel for teeth-gnashing and desk-banging of an advanced variety.

It was suggested by one of the talking heads at half-time that Sturridge might have won a penalty had he stayed down rather than attempt to stand and recover the ball. For football’s sake, I hope this assessment is incorrect. It implies that referees decide the quantum of punishment based on the aggressor’s reaction rather than the action itself, which makes absolutely no sense. If the man did this, he is sightless without any sense of discrimination. I will be kind and say that he was merely incompetent. That’s an argument old enough to accept.

Where do we go from here?

To Manchester and another meeting with our old friend David Moyes, of course. After the bulldozer-based massage his team was subjected to on Sunday, he will no doubt want to field his strongest possible team in the midweek clash; he cannot afford to lose to so many rivals so often, and so early in his tenure. That means Wayne Rooney and possibly Shinji Kagawa will be on the field. That suits me fine. I want a good fiery fixture.

But I’m not so optimistic about persisting with a 4-3-3 in Johnson’s absence. It makes no sense without an overlapping full-back. Rodgers could instead go for a 3-5-2 and pack midfield to give Gerrard some breathing space when going forward. For once, we have more momentum going into this fixture. It’s important that we sustain it. Equally important, we must stop the flapping and flailing, and recognise that we are still in control of our season.