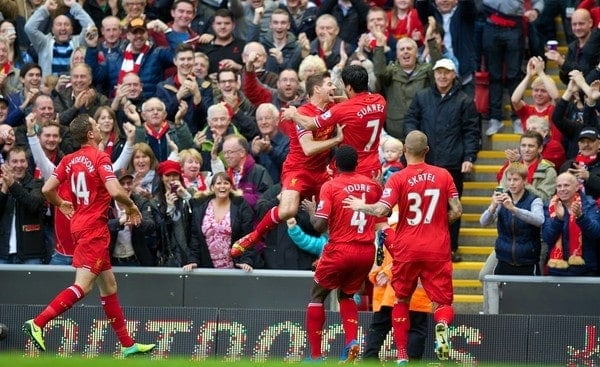 Liverpool provided their best performance of the season to demolish West Brom at Anfield. Luis Suarez with his first Anfield hat-trick and Daniel Sturridge adding a superb fourth. The performance of Suarez caught the eye, with owner John Henry labelling him a “magician”.

Liverpool's strike duo Daniel Sturridge & Luis Suarez have scored or assisted a goal on average once every 68.5 mins in the EPL this season.

@thisisanfield Sturridge after his goal. Think he was happy ;-) pic.twitter.com/ioMWGa8Nzv

Suarez is a genius! Great performance by Liverpool!

Getting the win is the main thing, but a performance like that was well overdue. Relentless, high tempo attacking and clinical finishing.

Suarez has just hit the bar with an overhead kick. This is a very, very special individual performance.

Liked our high line of pressing and quick passing when we won the ball was influential. Also made up for Martin Kelly coming back. #LFC

A Saturday 3pm kick off, a convincing win, brilliant goals and a laugh with mates. That'll do nicely, ta.

Wasn't sure about the formation pre-game, but switching the midfield triangle let Gerrard & Henderson thrive in best position. #LFC.

Suarez & Sturridge have scored 10 goals & assisted 3 goals in the last 4 Premier League games. Keep them fit, buy a CM & top 4 is ours.

"They're a very good side but it was more about how good we were today. We pressed the ball much better, that was the key." Rodgers.

Photo: Liverpool's hat-trick hero Luis #Suarez with the match-ball after the 4-1 win over #WBA. #LFC pic.twitter.com/q6F3ISVtkE