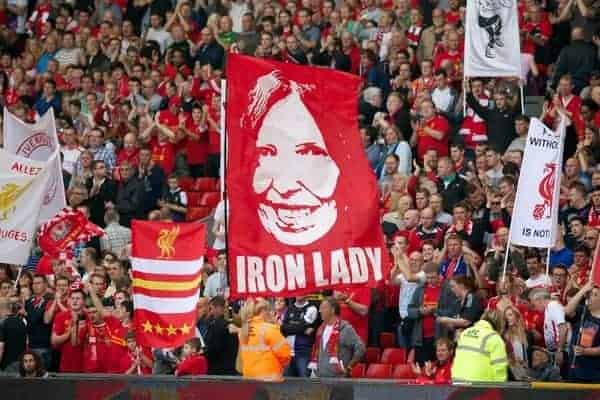 Si Steers continues his look at the overall running of the club as Liverpool FC enters a more positive new dawn. This is part two of two.

The culture of the club is something that is sacred, and should be at the heart of any decision about future direction. It is perhaps the one area that hasn’t had the focus it should have until recently.

The inception of the supporters committee was a very good move; it gives the clubs global fan base a voice right at the heart of the club. But when you look at the sections of our support; it is the traditionalist movement that perhaps is most representative of those fans from the City. The Spirit of Shankly supporters union is the most vocal section of the clubs support – Jay MacKenna from SOS talks in a bit more depth about the Unions aims here.

It is right that supporters from the City take an active role in retaining the clubs identity. Liverpool might be a global football club, but its roots are firmly on Merseyside.

When Kenny Dalglish parted ways with the club last summer, many traditionalist fans saw that as part of the clubs identity being stripped away. We are talking about one of the greatest living legends in the club’s history – something that is looked at in more detail here.

Bringing Kenny Dalglish back as a non-executive board member restores that link to the clubs identity. In addition, it puts in place a voice of trust at the very top level of the club.

As well as the return of Dalglish, there are a number of ex-players working with the club to retain that link; Ian Rush is a global ambassador, Robbie Fowler and Steve McManaman are working with the academy.

There have been some excellent appointments over the past few months that prove the owners are committed to Liverpool retaining its identity. They have recognised the importance of culture; and by appointing Kenny Dalglish to the board have the perfect adviser in place to lead them through the complex cultural dynamic of the traditionalist support.

This is perhaps the one area where supporters are still watching closely. Over the past three years, the owners have made mistakes, as have the club hierarchy. Those mistakes are likely to have been naivety which is to be expected when trying to learn ‘on the job’.

But the frustration has been that those mistakes have been self-inflicted, and could all easily have been avoided.

Since the appointment of Susan Black as Head of Communications the club has been much better at managing issues. Issues are quickly and effectively dealt with and closed down; the Suarez ‘bite’ was a very well managed response to a very difficult issue.

There are still question marks over Ian Ayre and whether or not FSG need somebody on the ground in Liverpool. The fact is, Billy Hogan is an FSG man, and he is very close to John Henry. Whilst Ayre maybe the MD, you’d expect that Hogan has a growing influence at the club, and works closely with Ayre on the big issues.

I am sure as the club continues to grow FSG will monitor the structure closely, and will act if they feel it needs tweaking to respond to changes in direction.

What really matters! All of the five strategic themes outlined above are all focused on one thing, and that is achieving success on the pitch. The club needs to be profitable to invest in the team and recruit the best players. So it is critical that the operation off the pitch is the best it can be so the club has the finances to compete.

The transfer committee has been a success so far; they have identified and successfully recruited players like Coutinho, Sturridge, Mignolet, Toure and Sakho who all look like they are the right quality at the right value. They have had to work within financial constraints, as the club has had to realign its wage bill, so players like Aspas and Alberto are more rough around the edges, but have the tools to succeed with the right development.

Talking of development, the club has invested a great deal in its Academy structure, and has some outstanding coaches leading the development of young players. The green shoots of that investment are starting to come through with Andre Wisdom, Raheem Sterling and Jordan Ibe all appearing for the first team over the past 12 months. The future of the club is in good hands with McParland, Borrell, and Inglethorpe.

So onto Brendan Rodgers: FSG took a risk when they appointed Rodgers in the summer of 2012. Handing a young, unproven manager the reigns of one of the biggest football clubs in the world on the back of a philosophy was a bold move. But Rodgers was the man FSG wanted; to the point they abandoned a favoured Sporting Director model to recruit him.

Rodgers has probably done about par so far, as in he has done what you would expect of him given the resources he has had at his disposal. Last season the league position was disappointing; but there were glimpses of the passing philosophy that Rodgers is keen to implement at every level of the club.

This season, our results have been excellent. We have a young, exciting team and have built a hungry squad. Performances haven’t been as impressive as results thus far; but winning without playing well is the sign of a side we want to be.

We look mentally stronger this season, more confident and hungrier. Perhaps this is because the squad has been refreshed and there are different voices in the dressing room. This is now looking like Rodgers Liverpool, not Rafa’s, not Hodgson’s (thank god!), and not Kenny’s.

We look to have the squad and mentality to make a really good run at the top 4 this season, we still need strengthening in midfield as a priority, but in defence and attack we have the capability to make the top 4.

What the future holds for Rodgers Liverpool will probably not hang on this season; he has a three year deal and I’d expect he will be given that time to get us back in the Champions League. But for Rodgers it is all about progression, and if he keeps the team progressing, he stays the right man for the job.

I have every confidence he will succeed at Liverpool. To me, he is the right cultural fit, he wants to understand the club, he wants to connect with supporters, he is desperate and hungry to succeed, and he is prepared to work as hard as he needs to get there. That is everything I want in a Liverpool manager; he deserves time from supporters to realise his potential and to make the club great again.

On the right path

When you look at the whole picture; the story of Liverpool since 2010 it is difficult to argue that club haven’t progressed under FSG. In the Tomkins Times survey 73% of fans agreed we have progressed; it is clear that when you look at each area of the club it is in a much better place now than it was in 2010.

When John W Henry stood up to Arsenal in the summer that was a message that the owners are not here to ‘asset strip’, they are here to win. There are still plenty of hurdles to overcome, and it is easy to say we are going the right way when we are sitting second in the league.

But what happens on the pitch isn’t the only barometer of progress; although it will always be the ultimate barometer. All of the great work that has happened away from the public eye will hopefully begin to bear fruit over the next couple of years as the jigsaw starts coming together.

As things stand, there is plenty to be optimistic about as a Liverpool fan, perhaps its time to allow ourselves a glimmer of hope. Albeit with the natural caution that comes with being a Red!