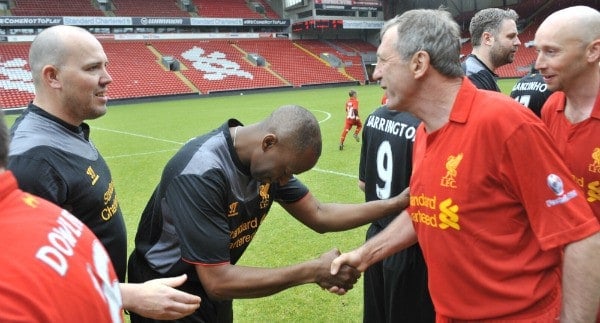 How would you like to Live Your Dream of running out at Anfield alongside a Liverpool Legend before taking part in a 90 minute match on the hallowed turf? Well now’s your chance as Liverpool FC have once again joined forces with Football Aid – www.footballaid.com – to give fans the opportunity to play at Anfield in 2014 and raise valuable funds for charity at the same time.

Football Aid offers Liverpool fans the unique opportunity to experience a matchday in the same way the likes of Steven Gerrard, Daniel Sturridge, Luis Suarez and co do every other week.

Players will gain exclusive access to the pitch and tunnel areas, pull on their own personalised shirt in the official changing rooms, walk down the tunnel to the sound of a cheering crowd and step out on the pitch and represent The Reds in a never to be forgotten 90 minutes of football!

To add to that, the matches at Anfield have also been supported by a host of fantastic Reds legends in recent years, with the likes of John Barnes, Alan Kennedy, Jim Beglin, Mark Wright, David Fairclough, Rob Jones, Howard Gayle, Football Aid Ambassador Jan Molby (and many more) all lending their extra special support by playing alongside or managing the fans on their big day.

Securing your position couldn’t be easier, just visit www.footballaid.com and choose the Liverpool games and then you’ll have two Fixed Price options: Option 1: Buy Now – Book your place with a one off payment, or Option 2: Sponsored to Play – Pay a non-refundable £100 deposit for your place, then pay the remaining balance anytime before the 31st Jan 2014.

“You’ve all seen it on telly, maybe lucky enough to see it from the stands but until you have experienced walking down the famous tunnel, touching the “this is Anfield” sign and walking out onto the pitch as a player only then will you ever come close to the feeling the players get when they play their first game on Anfield.

The whole day was superbly organised from start to finish and an absolute pleasure to have been a part of. The work you guys do is amazing from what was a quality day, only other fault I could find that the game was only 90 minutes long…it could’ve done with another 90 minutes as it flew in. Would definitely do it again next year.”

So if you’re keen to secure a place on your Field of Dreams this season, why not visit www.footballaid.com and sign up today!

Since forming in 2001 Football Aid have allowed over 14,000 football fans the chance to Live the Dream in 535 charity matches all over the UK. The unique concept was the brainchild of businessman and Football Aid Chairman Craig Paterson and funds raised from this year’s events will benefit the work of the Liverpool FC Foundation, as well as projects nominated by Football Aid’s parent charity Field of Dreams.