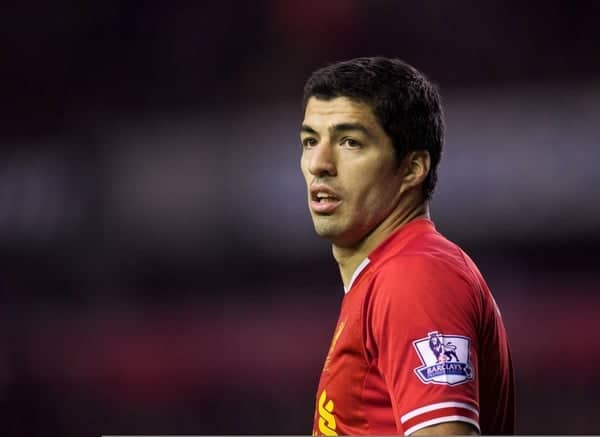 Liverpool have been blessed with talented strikers in the last fifty years—is Luis Suarez the most talented of them? Luis Suarez produced yet another majestic display on Saturday at Anfield, with the Uruguayan scoring twice in the Reds 4-0 mauling of Fulham. The club is lucky to have had some truly wonderful strikers during its great history, but is the 26-year-old the most naturally gifted to have ever graced Anfield?

On current form there is no better player in the Premier League. Despite missing the opening six games of the season Suarez is, remarkably, joint top scorer in the league alongside Daniel Sturridge and Sergio Aguero. He has eight goals in five appearances, and has responded magnificently following the drama that centred around him last season and this summer.

It’s not only his goals that make him so special, however. His ability to beat a man is almost unrivalled, he creates endless chances for others and his work rate is phenomenal. There is no better striker on the planet at the moment, and that is not being biased.

So who can lay claim to potentially being a more talented Liverpool forward than Suarez over the last 50 or 60 years?

Billy Liddell was a superstar at Anfield in the 50s (and latter part of the 40s). Although often used as a winger he could also play centrally, and scored 228 goals for the Reds in 534 appearances. A tall man, particularly for that era, Liddell was strong, quick and hugely influential at the club. I won’t lie and say i’ve seen endless clips in order to compare him to Suarez, however. I haven’t.

The 60s were dominated by the lethal strike duo of Roger Hunt and Ian St. John. Of the two, Hunt is the true Liverpool legend, and remains one of the greatest British goalscorers is history. He scored relentlessly throughout the decade, and is the club’s second highest scorer of all time with 286 goals. Although a top, top finisher, Hunt was not blessed with the genius or creativity of Suarez.

As the Hunt/St. John partnership ended at the end of the 60s, the 70s saw a new strikeforce emerge. Kevin Keegan and John Toshack were the classic ‘little and large’ combination, and they enjoyed great success as the club began to dominate domestically.

In truth, Toshack was not the greatest footballer around, nor the greatest goalscorer, but his aerial prowess was superb. It was Keegan who was the real star at the time, and the Englishman remains undoubtedly one of the best strikers to have played for the Reds. Excellent technically, fast and hard-working, he was not unlike Suarez in style. Having left Anfield in 1977 he won the Ballon d’Or twice in row while at Hamburg, which proves what a fine player he was.

His exit, however, paved the way for the signing of, in the eyes of many, the greatest player ever to have donned a Reds shirt.

Kenny Dalglish joined from Celtic in 1977 and was, quite simply, a phenomenon at Anfield. He won six league titles, three European Cups and two FA Cups, and is seen as the finest player Scotland has ever produced. ‘King Kenny’ played in the number 10 role (even though he wore number 7) behind Ian Rush, and the relationship they created was unparalleled.

The Scot was far from the quickest player around but his vision and class was on another level to anyone else at the club. He scored goals (172), created many, worked hard and produced in big games, notably the 1978 European Cup Final against Bruges at Wembley. He was as influential in his role as the likes of Dennis Bergkamp and Gianfranco Zola have been in the Premier League era.

Despite the incredible legacy Dalglish has left at the club, and the fact he may well be the Reds greatest ever player, was he as gifted as Suarez?

Rush, meanwhile, was the greatest scorer in Liverpool’s history. His 346 strikes for the club make him the Reds top scorer of all time, and it is a record that’s unlikely to be beaten for a very long time. The Welshman was a wonderful finisher, capable of scoring headers, volleys, tap-ins and solo efforts. If you were to liken him to a player from more recent times it would be someone like Alan Shearer in his younger years, or Ruud Van Nistelrooy. Like Hunt, he wasn’t blessed with genius in his boots, just a remarkable ability to score goals.

John Aldridge replaced Rush in the late 80s, and was another top striker similar in style to the Welshman. He was very clinical in his two years at the club, scoring over 60 goals.

A new star in the shape of Robbie Fowler arrived in the early 90s, and he is without doubt one of, if not the most, naturally gifted finishers in the history of Liverpool Football Club. He scored on his debut against Fulham as a precocious 17-year-old, and scored five in the second leg of the League Cup clash.

It was between 1994 and 1997 that Fowler reached his peak. He was the star man is Roy Evans’ exciting, young side, scoring 98 goals in three seasons. Blessed with a great left foot, he had the ability to score every type of goal, and in a stylish manner. He was a different kind of player to Suarez, but again lacked that individual brilliance and creativity that the 26-year-old does. Stan Collymore was a player who had terrific ability- his partnership with Fowler was superb- but his attitude was never good enough to succeed at such a big club.

As Fowler’s influence as the club began to wane, a young Michael Owen emerged to become the new darling of the Kop.

He may not be popular at the club now, mainly because of the way he left and the fact he played for United, but there is no doubting he was an incredible talent for a time. Before hamstring injuries took away his blistering pace, Owen was the most exciting player in the country in the late 90s and early 00s. He scored some wonderful goals, and won the 2001 FA Cup Final on his own. His displays for club and country saw him win the European Player of the Year award in the same year, again highlighting his quality.

Despite his many plus points, Owen was not a great creative striker, and would often do nothing in games until popping up with a late winner. While this was his style, there can be no comparison talent-wise between he and Suarez.

When Owen left in 2004 there was a three-year period where the Reds lacked a world-beater in attack. The likes of Milan Baros and Djibril Cisse did their best, and won the 2005 Champions League, but were never good enough the lead the line at Anfield for a sustained period.

Fernando Torres‘ arrival from Atletico Madrid in the summer of 2007 created great excitement at the club, and he didn’t disappoint. The Spaniard became the best striker in the world for a time under Rafa Benitez, and was unstoppable in his first three seasons at the club. He was strong, fast and lethal in front of goal, and looked as though he would become a Liverpool legend. Injuries started to creep in, however, and his attitude got worse in his final year at the club. He eventually moved to Chelsea for £50m, and the way he has played there since his move in January 2011 would suggest Liverpool did a superb piece of business in letting him go.

This brings us to the present day, and the genius that is Suarez. In my opinion he is the most exciting, talented striker to have ever played for Liverpool. This doesn’t mean I think he is necessarily better than the likes of Dalglish, Fowler and Rush, I just feel none of them were quite as special as the Uruguayan.

It’s important we appreciate one of the world’s top players while he’s still here and displaying his genius week in week out.

Do you agree that Luis Suarez is Liverpool’s most talented striker of all time?