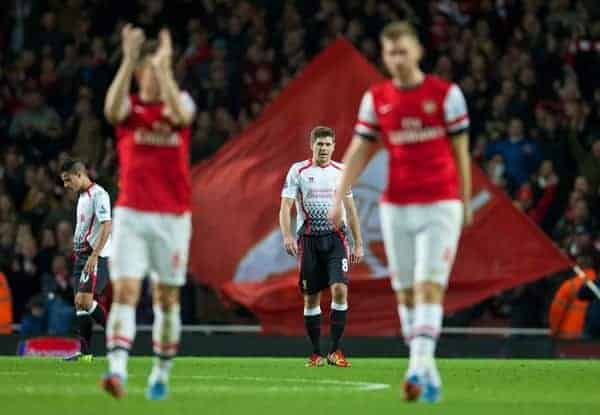 Liverpool suffered their second league defeat of the season on Saturday evening, going down 2-0 to Arsenal at the Emirates Stadium.

A first half strike from Santi Carzola and a second half screamer from Aaron Ramsey put the game beyond Brendan Rodgers’ men, who struggled against the league leaders on all levels.

Jon Flanagan came in for the sick Glen Johnson in an otherwise unchanged line-up to that which beat West Brom 4-1 at Anfield last Saturday.

At half-time the under performing Aly Cissokho was replaced by the returning Philippe Coutinho, playing his first game since sustaining a shoulder injury against Swansea in September.

The later introduction of Victor Moses also did little to help break through the Gunners’ resilient defence and the home side held on for three points.

The nature of Liverpool’s defeats will be the bitterest pill to swallow as Liverpool looked average at best throughout.

Liverpool now sit in third place, five points off Arsenal, with Fulham up next at Anfield on Saturday, 9th November 2013.