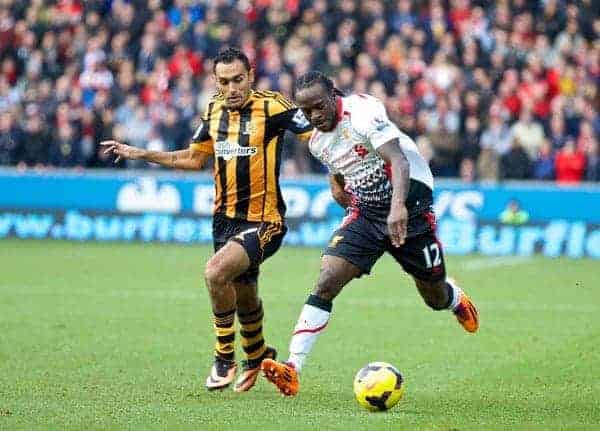 Hull City inflicted a third defeat of the season on Brendan Rodgers’ Liverpool on Sunday afternoon with a 3-1 victory at the KC Stadium.

With Daniel Sturridge and Philippe Coutinho injured, Victor Moses and Raheem Sterling came in to support Luis Suarez in attack.

Kolo Toure replaced Daniel Agger at the back, partnering Martin Skrtel, whilst Jon Flanagan kept his place at left-back.

Jake Livermore gave the home side the lead on 20 minutes. After Hull had dispossessed Moses deep in the Liverpool half, Livermore’s shot took a wicked deflection off Skrtel to give Simon Mignolet no chance of saving.

Second half substitutions of Luis Alberto and Coutinho on for the very poor Moses and Raheem Sterling did little to turn the game Liverpool’s way.

Hull, buoyed by a loud atmosphere from their fans, later took the lead with just under 20 minutes to go.

Minutes after Moses could have put Liverpool 2-1 up, David Meyler took advantage of sloppy Reds defending with a good finish past Mignolet’s outstretched left hand.

Luis Suarez went close from a free-kick late on, whipping the ball slightly left of the Hull goal.

But in the 86th minute, Hull put the game beyond Liverpool. Tom Huddlestone’s shot after good hold up play by Yannick Sagnbo was put into his own net by Skrtel.

The result means Liverpool drop to third in the Premier League, now level on points with Everton and Chelsea – who play Southampton at home later today.

Next up for the Reds is two home games in a row – against Norwich on Wednesday night, followed by West Ham on Saturday, 7th December.