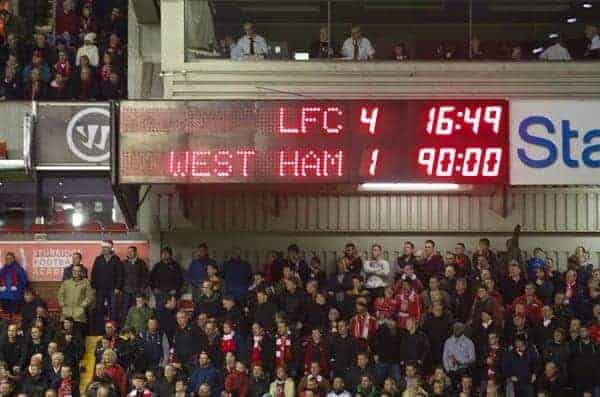 Liverpool won for the second time this week on Saturday afternoon, running out 4-1 winners over West Ham at Anfield. Before kick-off, there was a minute’s applause for Nelson Mandela, who passed away this week, aged 95.

Guy Demel was unfortunate to give the Reds the lead when the ball went in off him into his own net just before half-time.

Until then, the teams had been fairly evenly matched, and Liverpool had goalkeeper Simon Mignolet to thank for not conceding in the opening stages.

The Reds doubled their lead shortly after half-time when Sakho scored his first goal for the club from close range.

After Martin Skrtel had put the ball into his own net, Liverpool’s third came from the head of Luis Suarez nine minutes from time, before Hammers midfielder Kevin Nolan was sent off for a studs-up tackle from behind. Joey O’Brien deflected a Suarez shot into his own net to round off a miserable day for West Ham.

Another cracking result for Liverpool, who held off long periods of West Ham pressure in the second half.

There was, however, an injury for Steven Gerrard, who will now undergo tests to determine whether he will miss any action for the Reds over the Christmas period.

With Chelsea losing at Stoke City and Manchester City drawing at Southampton, Rodgers’ side return to second in the table – just four points behind Arsenal, who play at home to Everton on Sunday.

PL table as it stands right now – Liverpool up to second, 4pts off leaders Arsenal, who play Everton tomorrow. pic.twitter.com/0Xla9F15gf

Demel Own Goal vs Liverpool by LFCmostar