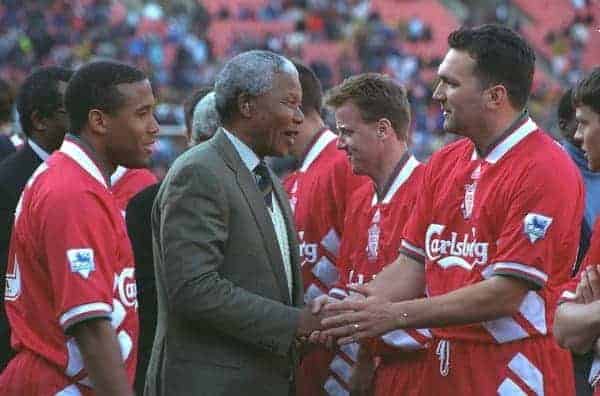 Liverpool and football unites to pay tribute to Nelson Mandela, who has died aged 95

Tributes have poured in from Liverpool and football fans for the late former South African president Nelson Manela, who died on Thursday, aged 95. Freedom campaigner Mr Mandela spent 27 years in prison before leading South Africa’s during transition from white-minority rule in the 1990s.

Mr Mandela had been suffering from a long-term lung infection.

“What made Nelson Mandela great was precisely what made him human. We saw in him what we seek in ourselves,” President Jacob Zuma is quoted by the BBC as saying.

“Fellow South Africans, Nelson Mandela brought us together and it is together that we will bid him farewell.” Sad news tonight that Nelson Mandela has passed away. He was awarded the Freedom of Liverpool in 1994 for his anti-apartheid work.

The greatest man on the planet has died. RIP Nelson Mandela

Truly gutted that Mandela has died. One of my childhood heroes and in his fight for freedom was more than heroic – world has lost an icon.

Imagine spending 27 years in prison just to change things for the better? To stand against prejudice? A truly incredible man. #Mandela.

I'll never forget listening with my Dad on the day Nelson Mandela was released from prison after 27 years.

Great contribution to humanity and a man who represented genius, personal integrity, and peerless instinct for survival and triumph #Madiba

Never met a better person in my life than Nelson Mandela. My sympathy to his family & his country.

“Death is something inevitable.When a man has done what he considers to be his duty to his people&his country,he can rest in peace” #Madiba

"We must use time wisely and forever remember that the time is always ripe to do right." Nelson Mandela.

Mandela was giant in our living history because he was a revolutionary. Those who seek to lead us but err on the conservative side take note

We know Nelson Mandela was pictured in a Liverpool shirt but forgive me for thinking this is the most iconic image. pic.twitter.com/uIHSfPjxpZ

Thoughts and prayers with friends in South Africa tonight. RIP Nelson Mandela. A man of remarkable courage and dignity.