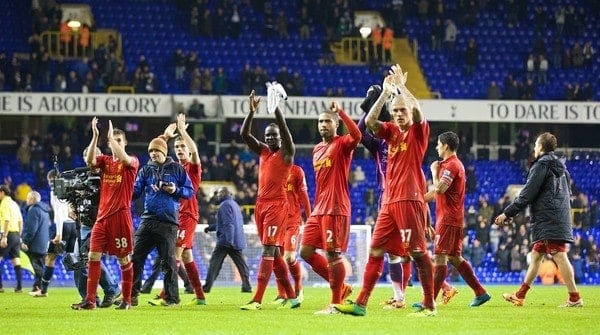 The Reds produced one of their all-time great Premier League away performances, trouncing Andre Villa-Boas’ side 5-0 at White Hart Lane. Luis Suarez grabbed two and Jon Flanagan scored his first ever Reds goal, on an unforgettable afternoon in north London. Suarez opened the scoring in the 17th minute with a superbly taken effort, curling home after good initial work by the exceptional Jordan Henderson. The Englishman outfought Michael Dawson in the penalty area, eventually poking the ball to the 26-year-old, who did the rest.

It had been a dominant start by the visitors, full of energy, good passing and intent, and they fully merited the lead.

Henderson doubled the lead after 39 minutes. Raheem Sterling, looking like a changed player, and Philippe Coutinho combined to send the 23-year-old through on goal and, after his initial shot and Suarez’s effort were saved by Hugo Lloris, he volleyed home a terrific effort to put Brendan Rodgers’ side in control.

Liverpool’s dominance continued in the second half, and Paulinho’s  62nd minute sending off for a reckless tackle on Suarez made life even harder for Tottenham. With 15 minutes remaining one of the Reds’ most memorable moments of the season occurred, as Flanagan fired home his first ever senior goal to add a third. Henderson found Sterling with a cute back-heel, and his cross was met emphatically by the youngster from close range.

Suarez got his second with a typically classy lob over Lloris, taking his Premier League tally to an astonishing 17 goals in 11 appearances, before Sterling completed the rout with a good finish from the Uruguayan’s pass.

The win leaves Liverpool second in the Premier League table, just two points adrift of leaders Arsenal. Up next for the Reds are Cardiff at Anfield next Saturday, before mouth-watering trips to Manchester City and Chelsea before the turn of the year.

Brendan Rodgers recalled Lucas Leiva in place of the injured Steven Gerrard, having been left out of the recent home wins over Norwich and West Ham.

The rest of the side remain unchanged from the 4-1 victory over the Hammers, with birthday boy Martin Skrtel and Mamadou Sakho again the preferred central defensive pairing. Luis Suarez captained the side with Gerrard and vice-captain Daniel Agger both missing.

Such was Liverpool’s dominance that Rodgers didn’t need to make a change until the 77th minute, replacing the returning Lucas, who was outstanding, with Luis Alberto. Victor Moses made a late cameo in place of Coutinho.