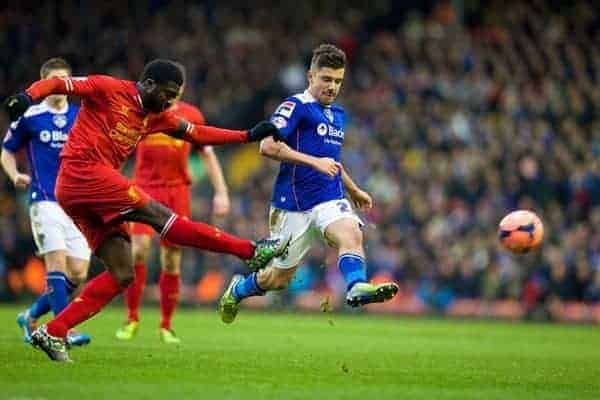 Kolo Toure says Liverpool are not out of the title race, despite Saturday’s disappointing 2-2 draw with Aston Villa at Anfield. The Reds came back from two goals down to Villa thanks to Daniel Sturridge and a Steven Gerrard penalty either half of half-time, but failure to secure a win leaves Brendan Rodgers’ side six points off league leaders Arsenal.

Liverpool could slip to fifth in the Premier League table should Everton win at West Brom on Monday night, with 16 games left to play.

“We are still in that (title race) because every team can lose points,” Toure is quoted by Sky Sports as saying.

“For us we just need to think about the next game 100 per cent, try to win and be positive.

“What we have done so far no-one was expecting at the start of the season.

Toure and his teammates were disappointed to have conceded two goals to the visitors on Saturday, with Liverpool finding themselves 2-0 down by the 34th minute.

However, the Ivorian international praised the fight of the Reds to get themselves back into the game.

He added, “The first half was very hard but the reaction from the team was great after going 2-0 down to a good Villa side – last year they won (3-1) here and it wasn’t easy for us.

“We got a point and that showed the character of the team. We don’t want to lose and that is very important, especially at home.

“Other teams will make errors. We just need to maintain our focus and believe in ourselves. In 16 games a lot can happen.”

Liverpool next face Bournemouth away in the FA Cup 4th Round next Saturday, 25th January 2014, before the Merseyside derby clash against Everton on Tuesday, 28th January.