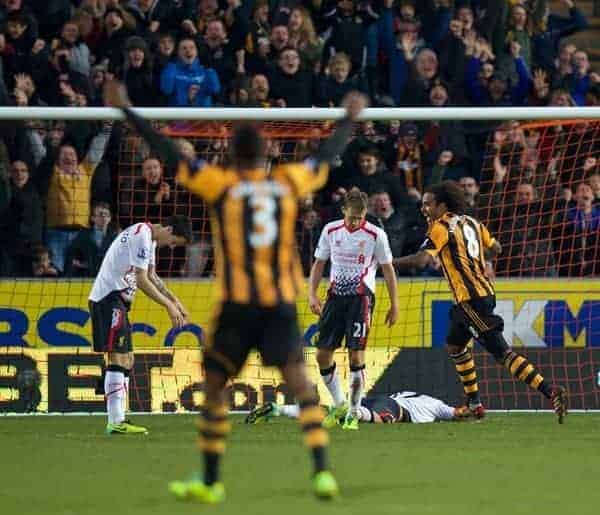 Brendan Rodgers’ side will be looking to banish the horrible memories of last month’s 3-1 defeat to Steve Bruce’s men, and Henry Jackson (OnFootballTweet) looks at the five most recent meetings between the two clubs.

The most recent meeting between the two was easily the most disappointing for the Reds.

An afternoon to forget got off to a bad start when Jake Livermore’s deflected effort gave the Tigers a 20th minute lead. Steven Gerrard’s terrific free-kick seven minutes later looked to have put Liverpool back in control of their own destiny, but a dreadful second half saw the visitors deservedly beaten.

A good finish by David Meyler and an own goal by Martin Skrtel rounded off a terrible day for Brendan Rodgers and his side.

The final day of the 2009/10 was not an enjoyable one for either club, and the game reflected that. A very forgettable stalemate was all they could muster.

Hull had already been relegated to the Championship prior to the game, while Rafa Benitez’s side had fallen way short of a top four finish, ending up seventh in the table.

It was to be Benitez’s final game in charge of the Reds, with the Spaniard sacked at the end of the campaign. Hull have often provided Liverpool with a stern test over the years, but this was a hugely comfortable afternoon for the Reds, as they romped to a 6-1 victory.

Fernando Torres was the star, scoring a hat-trick 47 minutes into the game. Giovanni had levelled matters early on after Torres’ opener, but from that point on it was all Liverpool.

Steven Gerrard’s outrageous effort- it is debatable that his shot from out wide was an attempted cross- got Liverpool’s fourth goal, before a late double from Ryan Babel put the icing on the cake.

The 2008/09 campaign was one of Liverpool’s best in Premier League history, and they picked up another important three points at the KC Stadium back in April of that season.

After a tight first half, Xabi Alonso fired in an unstoppable effort to put Liverpool ahead on the stroke of half-time. Caleb Folan’s red card after 60 minutes, for kicking out at Skrtel, made life even more difficult for the hosts.

Dirk Kuyt doubled the lead, and although Giovanni got one back, Kuyt’s second of the game sealed a relatively comfortable 90 minutes for Benitez’s formidable side.

Liverpool could only manage a point at Anfield five years ago, but they had the talismanic Gerrard to thank for saving them from an embarrassing defeat.

Paul McShane and an own goal from Jamie Carragher stunned the hosts just 22 minutes into the game, especially as the Reds were being tipped by many the win the Premier League title that season.

Gerrard’s doubled brought the game level before the break, with two typically clinical finishes in front of the Kop. A frustrating second half saw the home side struggle to get a winner, and they had to settle for a third disappointing home league draw on the bounce.

It was dropped points like these that gifted Manchester United the title that season.