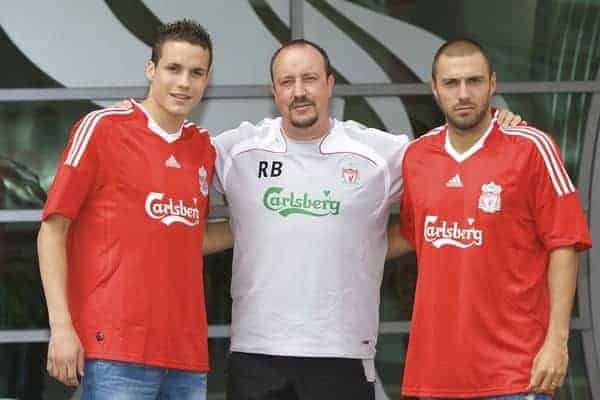 For some players, the dream move to Liverpool doesn’t quite work out. Jack Lusby (@LusbyLatest) selects his XI of post-Liverpool success stories of players still playing today. Joining from French club Lens in 2007, Itandje was limited to cup appearances as he provided cover for the imperious Pepe Reina.

Itandje left Anfield on a sour note, outcast after he was seen laughing and joking at a Hillsborough memorial service. His departure signalled an upturn in fortunes for the French-born shot stopper.

Now with Turkish club Konyaspor, Itandje has recently impressed for the Cameroon national team – most notably receiving plaudits for his performance in a goalless draw away to Tunisia in their recent World Cup play-off.

On the subs bench: Scott Carson

The arrival of Glen Johnson a year later, along with a string of injury problems, hampered Degen’s progress.

Benitez’ replacement by the messianic Roy Hodgson brought the end of Degen’s career at Anfield, as he was loaned to VfB Stuttgart and finally released.

Now back at boyhood club FC Basel, Degen has enjoyed measurable success: winning the Double in his first season back.

On the bench: Antonio Barragan

Signed from Rangers in 2010, Wilson was regarded as the ‘next big thing’ after being awarded the Scottish PFA Young Player of the Year award.

Rarely letting himself down, Wilson’s downfall was mainly due to competition at the club: finding himself behind such luminaries as Sotirios Kyrgiakos and Sebastian Coates in the defensive pecking order.

Having joined Hearts in 2013, Wilson was appointed club captain this season, at the age of 21.
Well-built and comfortable on the ball, Danny Wilson may have been a useful addition to Brendan Rodgers’ squad this season.

On the bench: Gabriel Paletta

San José joined Liverpool from Atletico Bilbao in 2007 and, much like Wilson, featured predominantly for the reserves in his two years with the club.

In order to gain first-team experience, San José was loaned back to Atletico for the 2009/10 season – a move which was later made permanent.

With over 100 league appearances for Atletico and a place in Spain’s 2012 Olympic squad, the centre-back is now firmly established.

A lofty defender capable of filling in at defensive midfield, San José can be considered one of the few genuine successes post-Liverpool.

On the bench: Jack Hobbs Argentine left-back Insúa was perhaps undervalued during his time at Liverpool. Three years with the club saw the defender produce some assured and encouraging performances on the left side of the back four.

However, Insúa found himself often third choice behind Fabio Aurelio and Andrea Dossena, and was eventually turfed out to make way for Liverpool icon Paul Konchesky.

Spells with Galatasaray, Sporting CP, and now La Liga hopefuls Atletico Madrid have seen Insúa proving his worth at a time when Liverpool’s full-back options are at their most paltry.

On the bench: Andrea Dossena

Arriving after an impressive showing in the 2010 World Cup, Danish midfielder Poulsen is one of the more established players to feature in this XI.

Poulsen’s diligent performances in the centre of midfield didn’t endear him to Liverpool supporters, and the Dane became synonymous with Roy Hodgson’s disastrous reign.

With Kenny Dalglish preferring local boy Jay Spearing, Poulsen was sold to French side Évian in 2011.

Now with Ajax, Poulsen was central to the Amsterdam club’s Eredivisie title success in the 2012/13 season.

Heralded by then-manager Gerard Houllier as the “new Vieira”, French midfielder Diarra joined Liverpool along with a weight of expectation.

Diarra, however, spent the entirety of his spell with Liverpool on loan to French clubs: Le Havre, Bastia, and then Lens.

Diarra later established himself with Bordeaux, and now has nearly 50 caps for France.

A transfer to the treatment tables of West Ham in 2012, however, has perhaps proven that, unlike Vieira, Diarra is far from home in the Premier League.

On the bench: Danny Guthrie

A renowned prospect when signed from Charlton Athletic, Shelvey never quite managed to fulfil his vast potential at Liverpool.

Shelvey did show enough promise during his time with the club, not least with a 30-yard strike against Chelsea in 2012.

However, the Englishman was clearly not suited to Brendan Rodgers’ style, and the Englishman now lends his passing range to Swansea’s cause in what is seemingly a better fit. Included in a bizarre players-plus-cash deal for Paul Konchesky in 2010, Alexander Kacaniklic impressed in the three years he spent with Liverpool’s youth team.

Now at Fulham, the Swedish winger has made regular appearances in the Premier League over the past two seasons.

Kacaniklic has also established himself within Sweden’s national team, particularly impressing in the recent 4-4 draw with Germany.

The winger would have likely flourished under Rodgers’ stewardship.

On the bench: Mark Gonzalez

A Benitez signing joining a Hodgson squad: Milan Jovanovi? was always portrayed as an outcast.
Reportedly enormous wages and disproportionate performances effectively cut the Serbian international’s Liverpool career short, and Jovanovi? was sold to Anderlecht after a year with the club.

The striker seemingly found his level at the Belgian club, an almost ever-present in their 2011/12 and 2012/13 campaigns.

Starting his career with Liverpool, much has been said of Ince’s transfer to Blackpool and his worth to the Anfield club.

After allowing his contract to run down at Liverpool, the winger was allowed to leave for scant compensation in 2011.

Having established himself as a bona fide key player at the Championship club, Ince has been linked with a move back to the Premier League ever since.

On current ability, there would surely be a place for Ince within Liverpool’s dynamic attack this season.

Have we missed anyone? Are there any other former Reds who have carved a career for themselves after leaving Anfield? Let us know in the comments below.