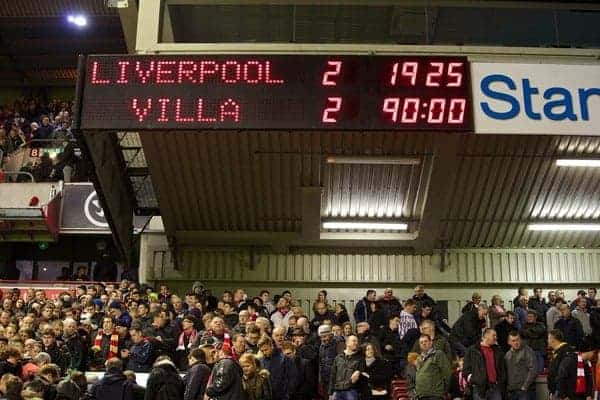 The Reds threw away two points on a very disappointing evening at Anfield, damaging their top four aspirations in the process. Henry Jackson (@OnFootballTweet) rates each player on the night.

The Belgian is in a poor run of form at the moment, looking shaky from crosses and making too many individual errors. His attempt to cut out the cross for Villa’s second goal was simply not good enough.

He is also taking too long on the ball, killing the momentum of Liverpool’s game in the process. The 25-year-old must improve.

Johnson again looked out of sorts, and even though he’s played worse this season, that’s not saying much.

At no point did he try and beat an opposing player or deliver an inviting cross, while defensively his lack of focus made it seem a potential error was always around the corner.

The 29-year-old has been Liverpool’s standout defender this season without a doubt, and he was the only player at the back to come out of the game with any credit.

He was strong in the tackle, good in the air and played with a passion lacking in others.

The Ivorian has been poor since coming back into the side, with Liverpool’s sudden leaking of goals coinciding with his return.

He was bullied by Christian Benteke throughout, looked lacking in pace and simply never looked comfortable. The return of Mamadou Sakho and Daniel Agger are absolutely vital.

The new Djimi Traore? Cissokho had a shocking evening against Paul Lambert’s side, and is simply nowhere near the level required to be a success at Liverpool.

The Frenchman was poor in all aspects of his game, whether it be his total lack of balance or woeful distribution. Gerrard’s first-half display was one of his worst ever as a Reds player. He was completely overrun and gave the ball away on countless occasions. Brendan Rodgers’ decision to play him so deep backfired hugely.

The skipper improved in the second half, however, playing in a more attack-minded role. He added drive and quality that was lacking so much in the opening 45 minutes, and helped create, and then score, the penalty that brought the sides level.

It may not have been his most impressive performance of the season, but Henderson was still undoubtedly one of Liverpool’s better players on the night.

His work-rate and use of the ball were always good, and his terrific assist for Daniel Sturridge‘s goal highlighted his underrated technical ability.

Liverpool badly need Coutinho to hit the heights of last season, and it was another sub-standard display from the 21-year-old Brazilian.

Too often he tried too much, trying to play the killer ball when an easier pass was required, and he was substituted at the interval. Highly likely to be dropped in the coming games.

Arguably Liverpool’s best player throughout, Sterling was a constant threat and showed up Coutinho both in his attacking and defensively work.

The diminutive winger was always willing to take on Ryan Bertrand, and although his crossing was erratic at times, his sheer effort made up for that.

Not Suarez’s finest display in a Liverpool shirt, but there were still some typically brilliant individual moments from the Uruguayan.

He was treated roughly by the Villa defence, often cutting a frustrated figure, but did win the penalty for Gerrard’s equaliser at a crucial time.

Like Suarez, Sturridge has, and will, play better for Liverpool. He often looked dangerous, but was perhaps guilty of being too greedy at times.

The 24-year-old produced a very well-taken finish to bring the Reds back into the game; his 24th goal in just 32 appearance for the club.

The Brazilian made a big difference when he came on, shoring up the midfield and allowing Gerrard to play further up the pitch.

Sadly he only lasted 20 minutes because of a knee injury, and as soon as he left the pitch Liverpool dipped hugely again. They will miss him a lot while he is out, and need to look at bringing in a defensive midfielder this month.

The Welshman didn’t impose himself on the game in the manner Lucas did, and while he wasn’t to blame for Liverpool’s woeful last 25 minutes, he did very little.

Allen is very neat and tidy, but he needs to start producing more influential performances if he is to become a first-team regular.

Do you agree with Henry’s ratings? Who was your Man of the Match?