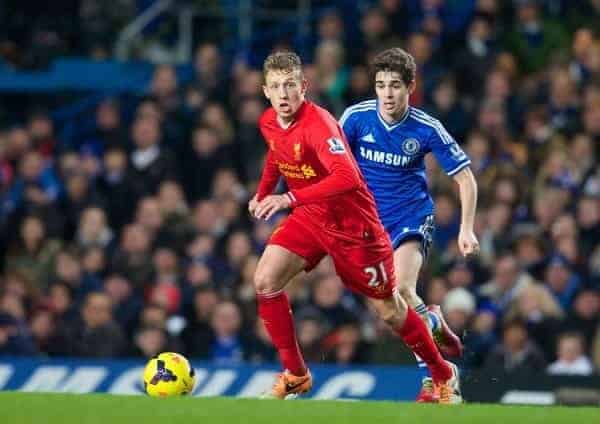 Liverpool midfielder Lucas Leiva faces two months out with the injury he suffered against Aston Villa on Saturday, according to The Mirror. The Brazilian midfielder left the pitch with a knee injury and some initially feared another long-term cruciate ligament injury such as the one he suffered in 2011/12.

The Mirror claim scan has revealed he has damaged his medial ligaments, meaning six to eight weeks on the sidelines.

It’s a bitter blow to the 27-year-old, with the World Cup on the horizon in his native Brazil.

Manager Brendan Rodgers discussed the injury after the match, saying he hoped it wouldn’t be too serious.

“He clashed knees with an opponent, so we’ll just see how he is,” he said.

“He just felt a little click in his knee. Hopefully it’s not too serious. We’ll not know for the next 24 to 48 hours.”

UPDATE: The Liverpool Echo are now reporting the story, adding:

He has already battled back from two major injury blows during his Anfield career. He ruptured the anterior cruciate ligament in his left knee in November 2011 and then tore a thigh muscle shortly after his return in August 2012.