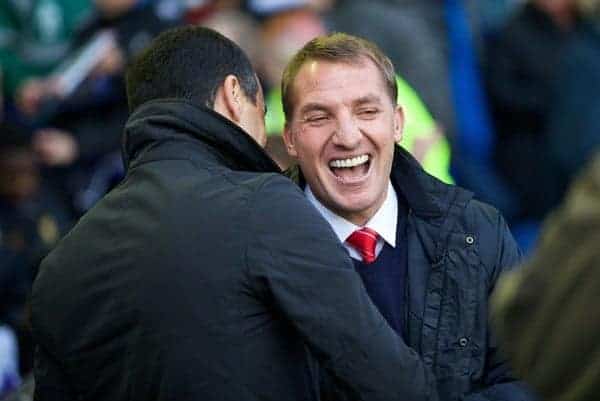 With Liverpool and Everton so close in the league, some are saying it’s the most exciting league Merseyside derby in decades.

Just one point separates the two Merseyside teams going into this game, with Liverpool sitting fourth in the Premier League and their neighbours sixth, behind Tottenham.

After sharing a 3-3 draw at Goodison Park earlier in the season, Brendan Rodgers will be hoping his side can defend stronger and claim and important three points at home this time round.

Everton come into this game on good form and confident — having seen off Stevenage 4-0 in the FA Cup on Sunday. They have also experienced wins over Norwich City and QPR this month, but were held to draws by Stoke City and West Brom in the Premier League.

There’s a good atmosphere around the Toffees too after defender Leighton Baines signed a new four-year deal with the club.

The Blues, like Liverpool, having their fair share of injury problems with Phil Jagielka, Sylvain Distin, Antolin Alcaraz, Seamus Coleman, Ross Barkley and Steven Pienaar all facing late fitness tests before the derby.

New signing Lacina Traore is carrying a slight hamstring injury, whilst Everton lost the services of Bryan Oviedo for the rest of the season on Sunday — the Costa Rican suffering a broken leg. Liverpool face an anxious wait on fitness tests to decide whether Joe Allen will be fit to start in the Reds’ already barren midfield.

Simon Mignolet will return to the goal after being rested for Saturday’s 2-0 win at Bournemouth, and Jon Flanagan returns for the first time this year after a hamstring injury.

Philippe Coutinho looks the most likely Liverpool attacker to be dropped, with Raheem Sterling coming back into the starting line-up to support Daniel Sturridge and Luis Suarez up front.

A win for Liverpool can take them to within three points of third place Chelsea, who face West Ham at home.

The game has all the ingredients for a classic Merseyside derby.