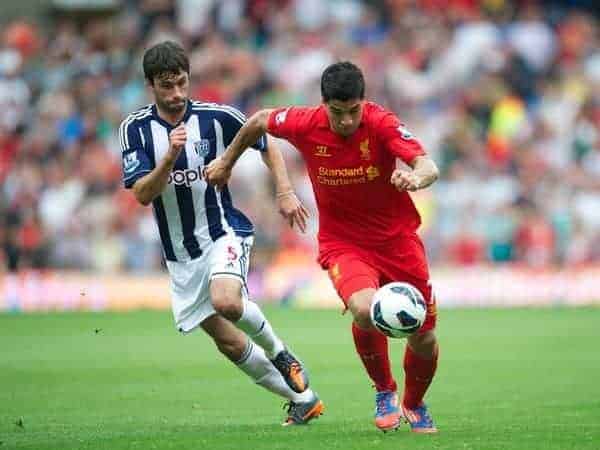 Liverpool could close the gap on third place Chelsea to just one point with a win a The Hawthorns on Sunday afternoon. Brendan Rodgers had the most miserable of starts to his time at Liverpool in this fixture last season — when Steve Clarke’s West Brom disposed of the Reds 3-0 on the opening day of the season.

The two clubs have gone very separate ways since then, with Rodgers cementing his football philosophy and the team and throughout Liverpool Football Club, whilst the Baggies have parted with Clarke and are now embroiled in a relegation battle.

West Brom go into this home clash against Liverpool sitting just once place above the relegation zone, level on points with 18th placed West Ham.

Now being led by Spaniard Pepe Mel, the side from the Black Country haven’t won since New Years’ Day when they defeated Newcastle at the Hawthorns.

Since then, they went out of the FA Cup at home to Crystal Palace, lost at Southampton, held Everton at home, and this week narrowly lost 4-3 away at local rivals Aston Villa.

The Baggies are without former Liverpool striker Nicolas Anelka, who suffered a bad knee inujury during the defeat at Villa Park in midweek. Stephane Sessegnon also misses out. With the Toffees having won on Saturday, a win is all the more important for Rodgers’ side, who welcome back Joe Allen from injury.

The match is live on Sky Sports 1 in the UK, but there is no Match of the Day, which has been moved to Monday night.