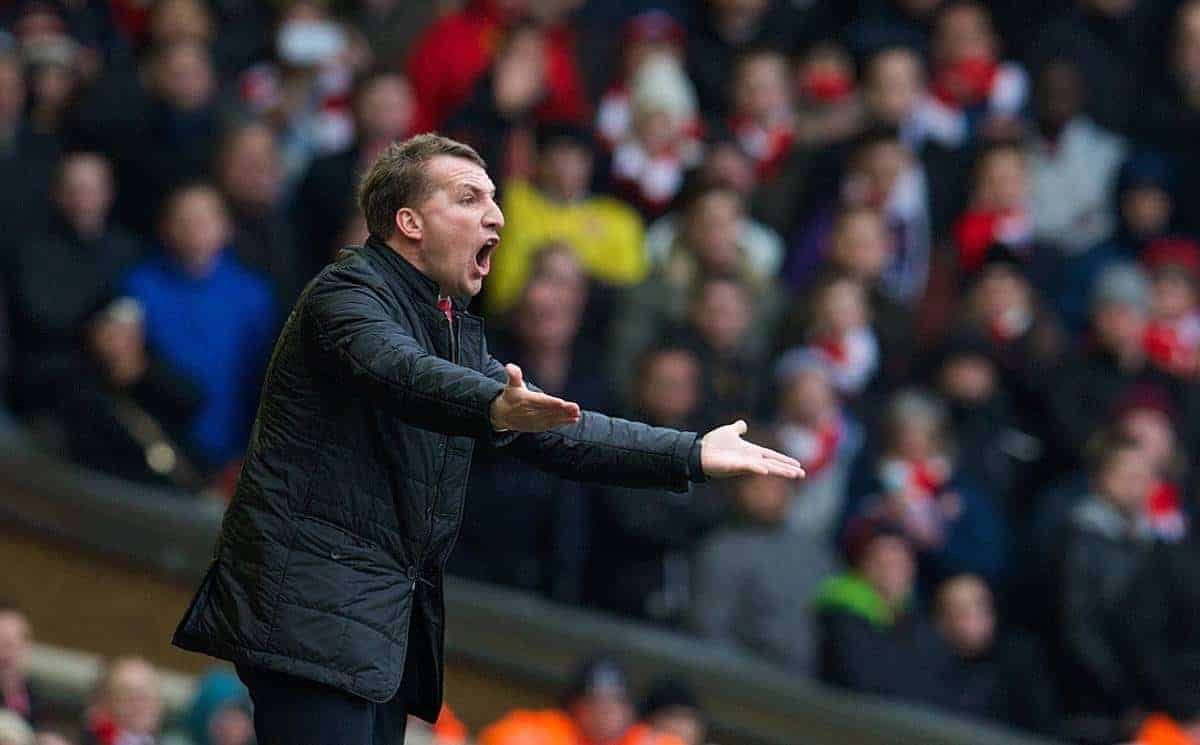 On 13th April 1988, Kenny Dalglish’s side hosted Brian Clough’s Nottingham Forest in a top-of-the-table clash. What followed were the finest 90 minutes ever by a Liverpool side, in the eyes of many.

Two goals from John Aldridge, and further efforts from Ray Houghton, Gary Gillespie and Peter Beardsley saw the Reds romp to a stunning 5-0 win. They played at a relentless pace, and were a joy to watch throughout. The victory was a huge step in Liverpool winning the title that season.

That side is largely seen as Liverpool’s most entertaining in history, with the likes of Houghton, Beardsley, John Barnes and Alridge providing a fearsome attacking unit. There have to be comparisons made with Brendan Rodgers’ currently array of offensive stars- Luis Suarez, Daniel Sturridge, Raheem Sterling and Philippe Coutinho– in terms of their speed, skill and pure fear they strike into the opposition.

Saturday’s 5-1 mauling of Arsenal had definite echoes of that famous day 26 years ago. They blew the league leaders away with four goals in the opening 20 minutes, and it is genuinely no exaggeration to say they could have scored seven in that time. The passing was crisp, the finishing was lethal and Arsene Wenger’s side simply couldn’t cope with Liverpool’s pressing game, clever movement and general hunger.

The key question is, in the long period between the destruction of Forest and the humiliation of Arsenal, has there been a better performance by Liverpool?

Here are five that may rival it:-

While the semi-final and final performances in Liverpool’s unforgettable Champions League success in 2005 were not always the easiest on the eye, the way they outplayed a fearsome Juventus team in the quarters was magnificent.

Fabio Capello’s team was littered with world-class stars like Gianluigi Buffon, Lilian Thuram, Fabio Cannavaro, Pavel Nedved and Zlatan Ibrahimovic, while the Reds, with all due respect, had players like Djimi Traore, Igor Biscan and Anthony Le Tallec in their starting XI. Nobody fancied to them to progress to the semis.

From start to finish they bossed the game, however, and Sami Hyypia’s terrific close-range volley deservedly put the Reds ahead early on. Luis Garcia then sent to a stunning effort past Buffon in the Juve goal, in what remains one of the greatest Anfield goals in many years. The way they were carving open such a well-respected defence was remarkable.

Although Cannavaro scored a priceless away goal after the break, the effort and standard of football that Liverpool produced, against all odds, was up there with the best seen at Anfield. They progressed to the last-four, thanks to a goalless draw in the return leg in Turin.

In terms of sheer entertainment this performance doesn’t come close to matching some of the efforts in the 1990s and beyond, but their team effort and commitment on the day puts it up there with Liverpool’s best performances, in my opinion.

Chelsea had not lost at home in the league for an astonishing 86 league games- over four years- going into the match, and at the time Stamford Bridge was arguably the toughest ground to visit in Europe. Rafa Benitez masterminded some great wins in his time at the club, and this was up there with his best.

The only goal of the game was scored by Xabi Alonso, whose deflected effort found its way past Petr Cech after 10 minutes. From that point on Liverpool, who were drilled to perfection in terms of defending and counter-attacking, withstood heavy Chelsea pressure with relative ease.

With Jamie Carragher colossal at the back, Javier Mascherano and Alonso anchoring the midfield, and Gerrard playing off Robbie Keane- Fernando Torres was injured- the team had a perfect balance to it. Every player was magnificent on the day.

The win took Liverpool to the top of the Premier League table, and made the whole of Europe sit up and take notice.

Benitez’s side were flying at this point during the 2008/09 campaign, and were one of the most respected teams in Europe. Their demolition of Real Madrid at Anfield was something special, and comes closest to matching the Arsenal victory.

The Reds had won the first leg of this last-16 clash 1-0 at the Bernabeu, and simply never allowed the Spanish giants a way back into the tie. Only a sensational display from Madrid ‘keeper Iker Casillas stopped it from being a cricket score.

After the break, Liverpool’s superb performance continued. Gerrard got his second of the game with a fabulous half-vollied finish, in what was one of his greatest performances in a Reds shirt, before left-back Andrea Dossena completed the rout late on after a sweeping move.

Benitez was often criticised for his style of football, but the quality they produced against one of the world’s biggest clubs was something to behold that night.

Surely Liverpool’s finest ever away win in the Premier League, Liverpool produced the perfect away performance just four days after their rout of Real Madrid.

Benitez and his team knew they had to win at Old Trafford to remain in the title race, and they gave United their heaviest home defeat for 17 years on an unforgettable afternoon five years ago.

Things actually started badly when Cristiano Ronaldo converted a penalty after 23 minutes, but from then on it was all Liverpool. Torres equalised clinically after a mistake by Nemanja Vidic, before Gerrard scored a penalty having been fouled by Patrice Evra.

With Liverpool bossing proceedings at a ground where many teams are taken apart, the game was effectively put to bed in the 77th minute. Vidic was dismissed for hauling down Gerrard, and from the resulting free-kick Fabio Aurelio bent a wonderful effort past Edwin van der Sar.

It was again left to Dossena to put the icing on the cake, with the Italian lofting a late effort into the Stretford End net to complete both a wonderful win and performance.

Admittedly it’s easier to remember great recent performances compared to older ones, but the level of quality shown in such a huge Merseyside derby two weeks ago was hugely impressive.

Many believed it was the most important Liverpool-Everton clash in decades, with both vying for a top four finish. Some even fancied Roberto Martinez’s side to prevail at Anfield for the first time since 1999.

Gerrard, so often the man to haunt the Toffees down the years, headed Liverpool in front midway through the first half to send Anfield delirious, before Sturridge doubled the lead with a fine finish after being found superbly by Coutinho.

Just a couple of minutes later the 24-year-old doubled his tally, lobbing the ball brilliantly over Tim Howard. Like Arsenal, Everton just couldn’t cope with the pace and dynamism of Liverpool’s front four.

If the game wasn’t already over early in the second half, Suarez ended Everton‘s chances in the 50th minute. The Uruguayan raced through on goal from the halfway line, before sliding the ball effortlessly past Howard. From that point on it was a procession, and it was Liverpool’s most emphatic win in a derby since 1982.

Despite the brilliance of the above performances, Saturday’s display pips it for me. The opening 20 minutes, in particular, were astonishing, especially when you take into account that Arsenal have the most consistent defence this season.

Every player played well, and several of them- Coutinho, Sterling, Gerrard and Skrtel- were outstanding. This is a side that is going places, and while previous Reds teams have been built on sturdy defences, this one is all about flowing attacking football. It can be their downfall at times, but nobody can say they’re not getting their money’s worth.

Brendan Rodgers is improving as Liverpool manager by the game, and Saturday was his finest moment yet in his 20 months at Anfield. He masterminded the Reds finest all-round performance in 26 years.

Do you agree? If not, which performance has been better than Saturday’s masterclass?