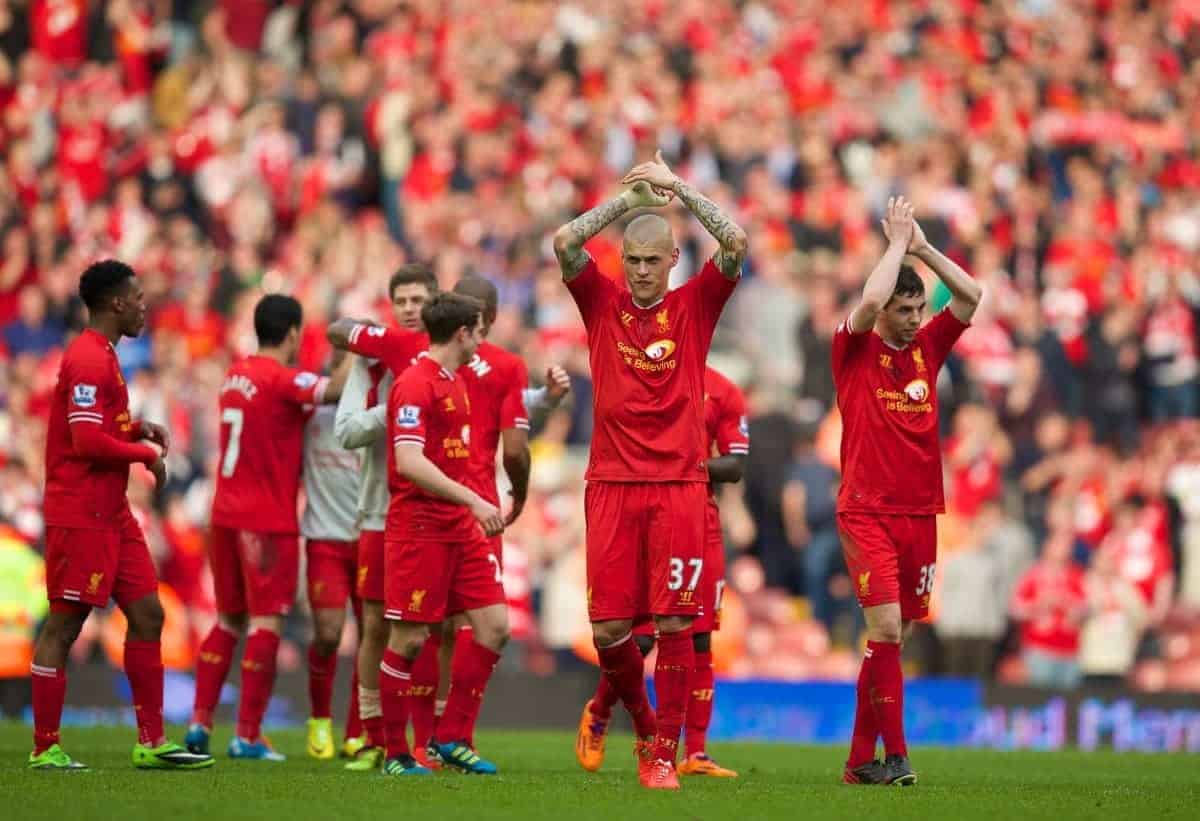 Following Liverpool’s 4-0 victory at home to Spurs on Sunday, Jack Lusby (@LusbyLatest) considers another solid performance by the Reds’ back-four as central to this win.

Another day another thrashing, Liverpool’s high-scoring romps are becoming a thing of welcome frequency, particularly against Spurs.

However, more subtly-central in this particular victory were the commanding performances of Brendan Rodgers’ back-four; Glen Johnson, Martin Skrtel, Daniel Agger and Jon Flanagan all deserve plaudits in what was a hugely impressive defensive display.

Pivotal to Liverpool’s 10th clean sheet of the season and, in turn, another fine win, Martin Skrtel and Daniel Agger proved what an impressive partnership they can be against Spurs.

Skrtel continued to show his unerring commitment to the cause with a fine block to stop what would have been, at least, a clear cut chance for Christian Eriksen with the game at 2-0. Not to be outdone, Agger followed this up with an important block of his own, thwarting Belgian midfielder Nacer Chadli late on.

Throughout the tie, both Skrtel and Agger typified the hunger and desire of the Liverpool squad as their belief grows and their thirst for Premier League glory grows stronger.

This season, both Agger and Skrtel have been criticised for deficiencies within their respective games; however, against Spurs they proved to be the complete package, and this is perhaps down to Rodgers’ confidence in the pair.

Subbed off in February’s 4-3 win at home to Swansea, Agger was covertly criticised by Rodgers for lacking “physicality”, however throughout this win Skrtel’s trademark uncompromising aggression was duly matched by that of the Dane.

As per Squawka, Agger made 10 defensive actions against Spurs, whilst Skrtel made 12.

Furthermore, Skrtel has been criticised for being somewhat poor on the ball – particularly prior to his growth this season – however in this game the Slovak proved he can play with the same composed poise as Agger.

Again courtesy of Squawka, Skrtel boasted a pass accuracy of 92 percent, with Agger just below this at 90 percent.

Rodgers continues to show his faith in his centre-backs, and against Spurs they repaid this in spades.

Throughout his much-reported contract dispute, right-back Glen Johnson has suffered with variable form; now returning following an “indefinite” period out, his latest performances have followed this trend.

A superb return-to-form against Cardiff, compounded by myriad overlapping forward runs, was unfortunately followed by a limp display against Sunderland as Liverpool struggled to a 2-1 victory.

However, back to his best against Spurs, Johnson’s consistent runs from right-back, troubled Danny Rose throughout: not least in the second minute, providing a dangerous cross to force Younes Kaboul’s own-goal.

Johnson will need to keep up this form if he is to convince Rodgers of his sustained commitment and value to the team.

After the game, Sky Sports quoted Johnson as saying “This is a fantastic club. Everyone involved here loves it and wants to win the league badly. We want to get the club back where it should be”, and as one of the only players in Liverpool’s squad to have previously achieved success in the Premier League, Johnson will be desperate to win once again.

On form, Glen Johnson is by far Liverpool’s best full-back option – a player whom wholly justifies his reported over-£100k p/w wages – and can be key to Liverpool’s increasingly likely title charge.

Jon Flanagan’s season, on the whole, can be described as a whole-hearted success; however of late the local lad has experienced some dips in form, most notably against Cardiff and Sunderland recently.

But Flanagan was integral at the weekend, as he continues to develop into a full-back who, surely much to Rodgers’ glee, is equally adept going forward as he is backwards.

His Carragher-esque commitment to the cause could be seen throughout as he threw himself, fairly, into challenges: a fine, full-blooded challenge on Spurs’ Roberto Soldado in the box late on in the game was representative of his performance as a whole.

Furthermore, the 21-year-old is now showing a real finesse to his game, slotting comfortably into Rodgers’ possession-based system.

As per Squawka, Flanagan had a passing accuracy of 91 percent against Spurs, and the Scouser complimented this by always been willing the take the ball on and, more often than not, challenge his marker.

This could be seen not least in his expert turn to pass Spurs winger Aaron Lennon, followed by the run leading to his assist for Coutinho’s long-range strike on 55 minutes.

Good to see the RedCafu is playing well! Liverpool amazing to watch!

On this showing, Rodgers can depend on Flanagan’s commitment and new-found ease on the ball as a permanent fixture on the left side of defence in the crucial final six games of the season.

Praise for Liverpool’s defence these days can’t pass without mention to Reds captain Steven Gerrard, who continues to boss the midfield in his new, deeper role. Often operating as part of a back-three between Agger and Skrtel, Gerrard performed with assured restraint throughout the encounter with Spurs – no doubt wary of his looming suspension situation.

With a launched ball causing trouble for the Spurs defence in the lead-up to Suarez’ goal, Gerrard proves he is still able to deliver from his deeper role, and this will no doubt be a cause for concern for opposing managers in Liverpool’s final six games.

Many criticise Liverpool’s defence, with Tim Sherwood bizarrely doing much the same following his side’s defeat, but this performance proved their worth in Liverpool’s title charge.

Rodgers is now being repaid for his faith in a consistent back-four, and this may prove key to Liverpool’s success in the Premier League this season.