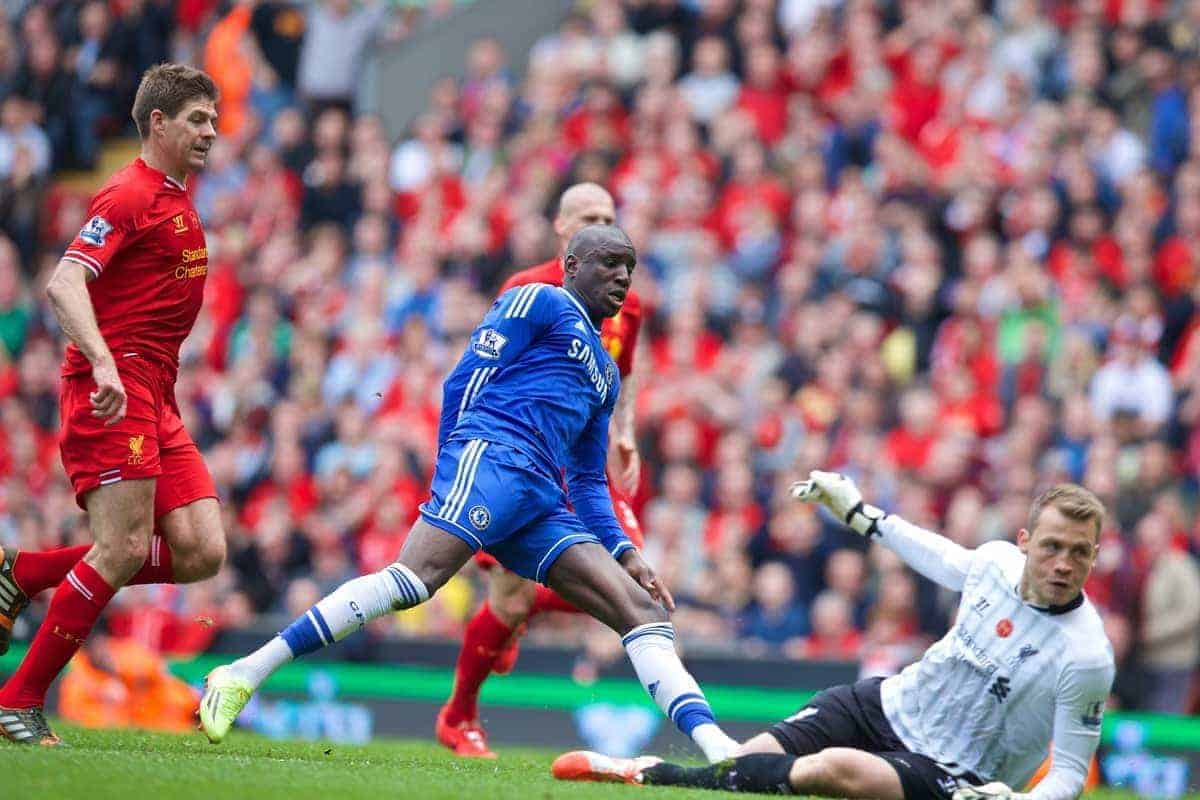 The Reds lost 2-0 to a resolute Chelsea side on a hugely disappointing afternoon at Anfield, ending their run of 11 straight wins in the process. The defeat means the title is now in Manchester City‘s hands.

Brendan Rodgers made no changes to the side that beat Norwich 3-2 last Sunday, with Daniel Sturridge still not deemed fit enough to make the starting XI following injury.

The first-half was often a case of attack vs defence, with Jose Mourinho’s side simply playing to frustrate the Reds. Their time-wasting was bordering on the laughable at times.

Ashley Cole saw an early long-range effort well kept out by Simon Mignolet, while Philippe Coutinho and Mamadou Sakho both saw decent opportunities for the hosts miss the target.

As the half wore on Anfield grew more anxious, and Chelsea looked fairly comfortable in keeping Liverpool out. Luis Suarez curled a shot over the bar with a half-chance, while at the other end Tomas Kalas missed a golden opportunity with a header from a corner.

In dying seconds of the half, however, disaster struck. Steven Gerrard, so often the driving force behind Liverpool’s sensational season, lost control and slipped just inside the own half, allowing Demba Ba to open the scoring in front of the Kop.

It was a shocking end to a frustrating opening 45 minutes. The second-half started exactly the same as the first, with Liverpool dominating but, ultimately, failing to break through their stubborn rearguard. Gerrard skewed a shot wide, but Raheem Sterling could arguably have had a penalty after being fouled by Kalas.

Joe Allen tested Marc Schwarzer with a good strike soon after, while Gerrard’s shot from the edge of the penalty area was caught with ease by Schwarzer.

Hope and belief seemed to drain out of the players as the game continued, and Liverpool’s lack of experience in big games like this seemed to tell. Chelsea, on the other hand, played with all their know-how of these situations.

Gerrard, clearly trying to make amends for his earlier error, kept trying to drag the Reds level, first with a shot wide then with a header, but it proved fruitless.

In stoppage time, Suarez shot from just inside the area, but as was the case all afternoon, everything went straight at the big Australian in the Blues’ goal. As the Reds desperately searched for a winner, ex-Red Fernando Torres and Willian broke away, and the Spaniard found the Brazilian to seal the three points.

It has been an absolutely glorious run of 11 wins in a row for Rodgers and his side, but a 12th on the bounce eluded them against an immovable force in Chelsea.

Rodgers again opted for the 4-4-2 diamond formation, with Allen to the left, Lucas to the right and Coutinho at the top. Sterling played in the central role alongside Suarez that he has become accustomed to of late.

Liverpool struggled to break down Mourinho’s men throughout, and although it may be hard for some Reds to accept, there is no side better in Europe at going to a rivals ground and getting a result.

The title race is now back in Manchester City‘s hands, with them six points behind Liverpool with two games in hand. Their goal difference is superior, meaning finishing level on points will be enough. Chelsea, meanwhile, are now just two points adrift at the summit.