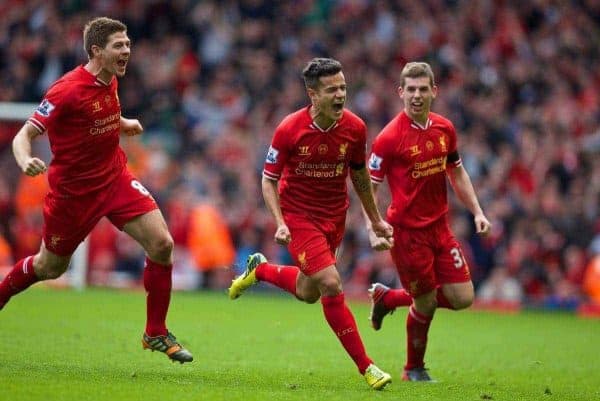 The Reds won an unforgettable game against Manuel Pellegrini’s side to strengthen their title hopes hugely, and Henry Jackson (@OnFootballTweet) rates each Reds player on the day.

The Reds number one had another good game, denying Fernandinho with a fine save and generally exuding calm throughout. Perhaps might have done slightly better with Johnson’s own goal.

The 29-year-old isn’t famed for his defensive work, but he was excellent all game.

Not only was he solid in his tussle with Samir Nasri, but he was constant outlet going forward too. Unlucky to score the own goal that made it 2-2.

The Slovakian has been colossal all season, and produced arguably the his performance of the season against City.

He was faultless definitely, making numerous crucial tackles and interceptions, and scored the vital second Liverpool goal with trademark header.

The Frenchman was good again, winning numerous balls in the air working excellently in tandem with Skrtel.

He wasn’t always brilliant on the ball, however, and was perhaps fortunate not to concede a penalty in the first-half. Worked excellently in tandem with Skrtel though.

The 21-year-old was superb from start to finish, and showed an authority that belied his years.

His pressing and tenacity in the tackle was terrific all afternoon, and he always offered support in attacking areas. He has matured into a very fine full-back.

The skipper led by example once again, and played as if his life depends on winning his maiden Premier League title.

It was a performance all about tackling, bravery and leadership, and the 33-year-old’s tears at the end showed just how much the win meant to him.

Henderson’s constant endeavour and running was key to Liverpool’s pressing style, and he never stopped all day.

The 23-year-old’s quality on the ball wasn’t always the best, however, and his deserved sending off late on means he won’t play until the final day of the season now. He will be a big loss to the side.

The Brazilian maestro was exceptional, outperforming the brilliant David Silva in the battle of the number 10s.

The 21-year-old’s touch, awareness and work-rate was a joy to watch, and his winning goal was Liverpool’s most important of the season so far. One of the most important in years, in fact.

Sterling and Coutinho, two of the Reds’ two youngest players, were the best players on the pitch, but the 19-year-old edged his Brazilian teammate with a magnificent performance.

He scored a superbly-taken effort to put his side 1-0 up, and City never coped with his blistering pace and quick feet all afternoon. The youngster really has been sensational since Christmas, whether as a winger or in a central role.

Sturridge’s form has dipped in recent weeks without a doubt, and he was far from his best against City.

The 24-year-old’s speed and movement was always a threat, but his effect on the game was very limited. Should have scored in the first-half.

Like Sturridge, Suarez failed to hit top gear, but even when he’s not in full flow he’s better than most.

He played on the edge all afternoon, and his diving was poor at times, but he was always a big threat. Produced a superb pass to find Sterling for the opening goal.

The Welshman added steel and calm to the side, and was impressive under immense pressure.

Who was your Man of the Match on the day? Where do you agree/disagree with the ratings?