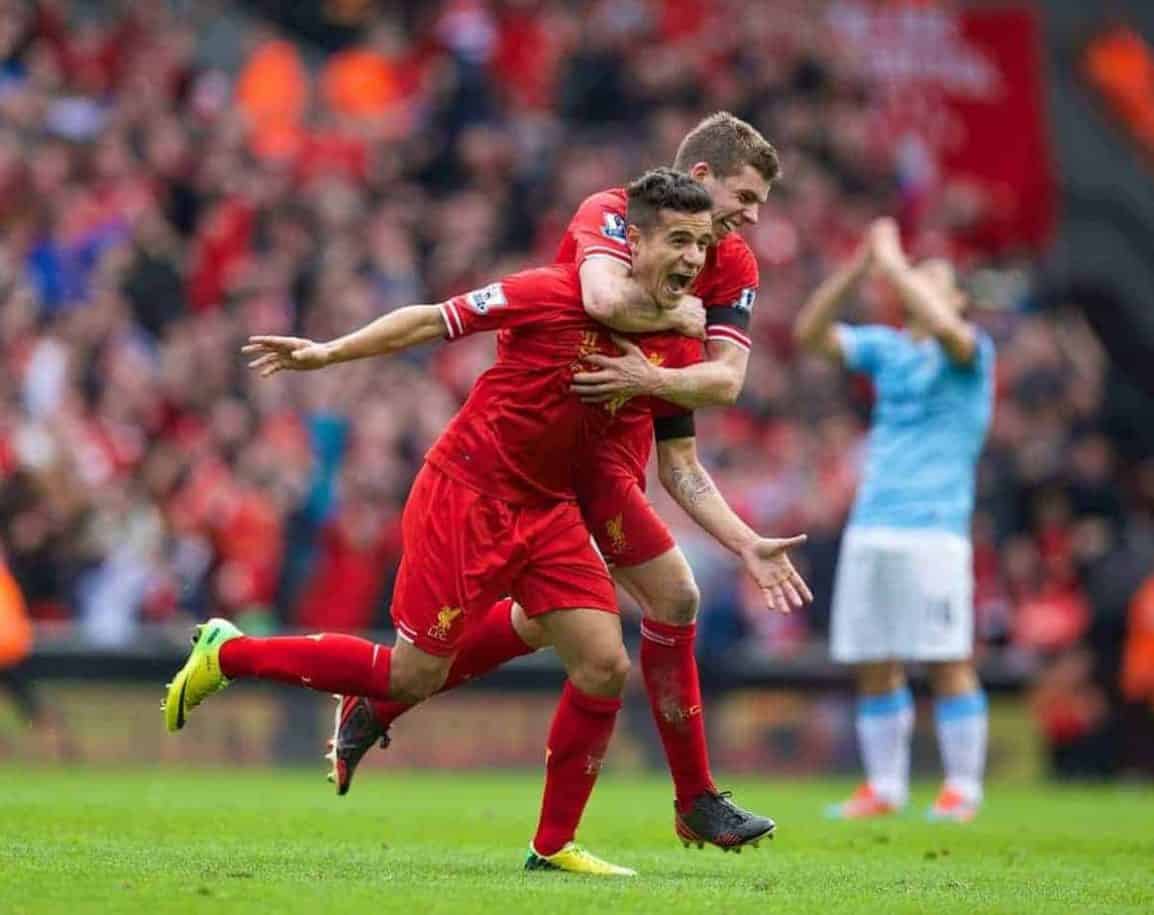 Philippe Coutinho‘s dramatic winner in Sunday’s incredible 3-2 win over Manchester City was enormous, but where does it rank among the most crucial of Liverpool’s 93 Premier League strikes this season? Henry Jackson (@OnFootballTweet) selects his top 10.

This was one of the finest Merseyside derbies in living memory, and Sturridge’s late goal earned Liverpool an important away point against their bitter rivals.

Having led 2-1 at Goodison Park, the Reds suddenly found themselves 3-2 down thanks to Romelu Lukaku’s late double. Just as it looked as though the visitors were going to suffer a demoralising defeat, Sturridge headed home Steven Gerrard’s free-kick in the 89th minute.

With the Reds already 1-0 up against their title rivals- some may feel Raheem Sterling’s goal should make the list- Skrtel’s superb header from Gerrard’s delivery sent Anfield into ecstasy.

It gave Liverpool breathing space, and had the Slovakian not scored, City’s second-half fightback could have seen them win the game. It was one of the most vital goals of Skrtel’s career.

Skrtel has been magnificent from day one this season, and he produced one of his most influential performances in the win at Cardiff last month.

Having already fired his side level to make it 2-2 before the break, the 29-year-old glanced home a header after 54 minutes to put Liverpool in control of the game for the first time. They went on to win 6-3.

The trip to Southampton was always going to be a stern test for Rodgers and his men, and although the final score may say otherwise, it was a very tough game.

Luis Suarez’s goal had given the Reds a half-time lead, but Mauricio Pochettino’s side had been the more dangerous team. Sterling, on as a substitute just seconds earlier, scored clinically with his first touch to put Liverpool crucially 2-0 up. Without that goal, things could have been far more tricky than they turned out to be.

Stoke away has always been a tough ground to visit, and Liverpool have struggled at the Britannia Stadium more than most. Having raced into a 2-0 lead, it looked as though they were in for an easy game there for once.

Two Stoke efforts stunned the visitor’s, however, and the two teams went in 2-2 at the break. Liverpool of old could easily have folded after that, but Gerrard’s ruthless 51st-minute penalty, after Sterling was fouled, restored their lead. They kicked on from there, winning 5-3 in a classic encounter.

The skipper has scored most of his goals from the spot this season, but this beauty against Sunderland last month was easily his most important in open play for a while.

Gus Poyet’s side had frustrated the host’s hugely in the first-half, and 0-0 at half-time would have made for a very nervy Anfield after the break.

Instead, Gerrard fired home an unstoppable free-kick six minutes before half-time, easing the tension and setting Liverpool on their way to an, albeit unconvincing, 2-1 win.

This is a goal that could easily be forgotten by some- perhaps if Luis Suarez or Gerrard had scored it it would be more memorable- but it was a massive moment in Liverpool’s season.

At this point in the campaign the Reds’ primary objective was finishing in the top four, and having blown a 2-0 lead earlier in the game, the score was 3-3 and two points were going to be dropped.

With time running out, Henderson’s saw his initial shot saved by Michel Vorm, but he raced onto the rebound to fire home in front of the Kop. It was a huge three points.

Liverpool haven’t had a much tougher away game all season than they did at Upton Park earlier this month. Sam Allardyce’s side pushed the Reds all the way, and it was Gerrard who proved to be the difference in the end.

With the score at 1-1 and Rodgers’ side not really looking like getting a winner, Jon Flanagan won a penalty. It was one of Gerrard’s most pressurised spot-kicks in a long time, and his second of the game, but he buried it emphatically to give his boyhood club an enormous win.

If you really think long and hard, Liverpool have hardly scored any stoppage time winners over the years. This rare one back in February was massive, however.

Having thrashed Arsenal a few days earlier, it looked as though the Reds were going to slip up against arguably the Premier League‘s weakest team this season.

Having trailed 2-1- Kolo Toure’s disastrous own goal opened the scoring- Philippe Coutinho‘s late effort brought the sides level. Just as it looked as though Liverpool would have to settle for a disappointing draw, Sturridge earned them a last-gasp penalty.

Gerrard converted it superbly, and the celebrations that followed showed just what an important moment in their season it was.

If Liverpool win the Premier League this season there will undoubtedly be a goal, if not more than one, that usurp this effort, but for now is has to be the most crucial.

Having led City 2-0 after a blistering start, Manuel Pellegrini’s side stunned Anfield with a second-half comeback. With the game looking as though City would kick on and win it, Coutinho delivered.

Vincent Kompany’s poor clearance fell to the 21-year-old Brazilian, who curled a superb effort past Joe Hart. The win made Liverpool title favourites for the first time this season, and etched Coutinho’s name into Anfield folklore.

Do you agree with the top 10? What would be your number one? Let us know in the comments section below.