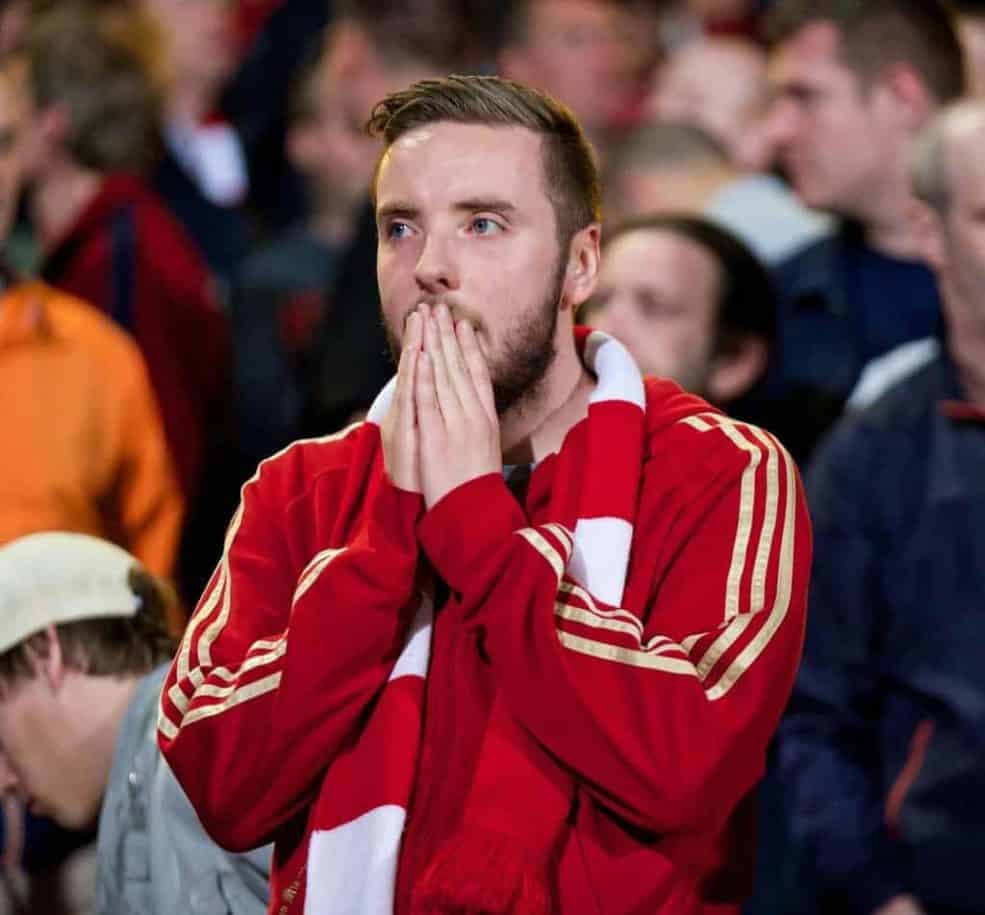 We round up the newspaper and social media reaction to Liverpool’s dramatic and stunning 3-3 draw at Crystal Palace on Monday night which left their Premier League title hopes hanging by a thread.

Luis Suarez’s tears of devastation summed up a horrible, horrible evening at Crystal Palace on Monday night for Liverpool. Just 15 minutes minutes earlier, it was looking to be a very rosy night indeed.

To recap for those at the back, 78 minutes gone and Liverpool were cruising at 3-0 and looking good for closing down the nine goal margin in goal difference between themselves an Manchester City in the league table.

A first-half strike from Joe Allen had been later followed by early second-half goals from Daniel Sturridge and Luis Suarez. The difference in goal difference was now six, but the objective still to secure the win.

And then “[Damien] Delaney’s 25-yard shot was deflected high beyond Mignolet” (BBC Sport), “a blur of activity but was composed enough to cross for [Dwight] Gayle for the second” (Independent), before “a long ball from the back was chested on by another substitute, Glenn Murray, and fell to Gayle, who left Mignolet with no chance” (Daily Mail).

Never has moving top of the Premier League in the final week of the season felt so deflating: pic.twitter.com/CeFlNsoqUN

Daniel Taylor of The Guardian quite poetically described the scenes at Selhurst Park as Mark Clattenburg blew the full-time whistle:

At the final whistle Steven Gerrard was on his haunches. All around him there were Liverpool players in a state of shock, some falling to the turf, others just wandering aimlessly. Luis Suárez’s shirt had been pulled over his face, trying to hide the tears, and Gerrard was pushing away the television cameras while trying to keep in his own emotions. They were a broken lot.

Henry Winter of The Telegraph says Liverpool failed when they saw the opportunity to extend their winning margin and close down the gulf in goal difference between themselves and Manchester City:

The desire to rack up the goals was understandable, and clearly ordered by Brendan Rodgers, but there was still naivety staining Liverpool’s efforts. Balance is required. The great Liverpool teams of the past had accomplished defenders, who could close out games. They have conceded seven goals in their last three games, damagingly at the business end of the season.

A common consensus was that Liverpool’s defence finally came unstuck. Bailed out time and time again by the prolific attack this season, the visitors caved in to be left stunned in the final 10 minutes.

Liverpool's defence has been saved by Liverpool's attack so often this season – but the whole thing came apart in those final minutes.

There were some rather unsavoury post-match tweets from Liverpool fans directed towards Glen Johnson, which prompted an angry response from the 29-year-old:

So many sofa experts in this game….
Absolutely no idea about football what so ever! #Jokers

Under-21 right-back Ryan McLaughlin, who spent the final stages of the season on-loan at Bansley as they suffered relegation from the Championship to League One, was the only other Liverpool player to tweet following the result:

Liverpool fans at Selhurst Park and on social media were awash with emotion, many conceding the title outright, as did Brendan Rodgers in his post-match interview:

But it’s not over ’til the fat lady sings. The result ultimately only changes one thing: Liverpool must hope Man City LOSE one of their two remaining games (against Aston Villa on Wednesday or West Ham on Sunday) to swing things back the Reds’ way. Two draws would do nicely too.

But for most, the dream is over. However, there is still a sense of pride and optimism from what has been a great, great season for Liverpool:

That's it now I'm afraid…been optimistic these past couple of weeks but #LFC will now finish runner-up. Good season when the dust settles.

The Times journalists at the beginning of the season, even those that support #LFC had us outside the top 4. We've defied them all.

Tonight like many other games showed us how much of an improvement is needed defensively in our team! We are still work in progress.

Carragher's frustration is coming out now. One wrong move and Ed Chamberlain's going to get a stool across his face.

The nipple-twisting irony of Arsenal fans calling Liverpool 'bottlers'. Arsenal were top of the league for 128 days and now they're fourth.