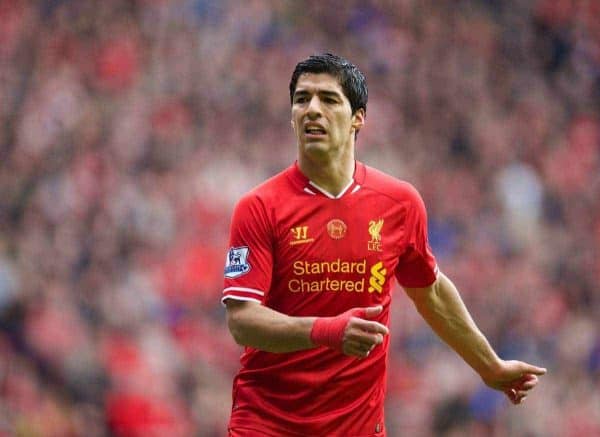 Luis Suarez — Do Liverpool sell or stick by him?

Luis Suarez’s heavy four month total football ban has thrown his Anfield future up in the air. Ben Twelves looks at whether Liverpool should cash in or keep hold of their world class striker.

Luis Suarez’s four month total ban from football has dealt Liverpool a shattering blow and has now given the club a huge decision to make.

The Uruguayan, who has been so vociferously backed by his employers in the past may have gone too far this time and as a result, has left his Anfield future hanging in the balance.

Any leeway or sympathy towards El Pistolero is likely to have well and truly evaporated following the latest disastrous events, which are completely inexcusable.

It’s a desperate shame that after enjoying such a memorable campaign last season, Suarez has reignited what we all hoped and what looked like he had left in the past after 10 months of pure sensational football.

The harsh implications of the ban on Liverpool will inevitably see questions raised over whether Suarez is worth the hassle any longer and rightly so.

But what matters is what the club think, and while he is undoubtedly a world class player, the baggage that comes with him may be viewed as more aggravation than its worth. So what should Liverpool do?

With the ban coming into effect immediately, Suarez would actually only miss just over two months of the season equating to him being unavailable for nine Premier League and three Champions League games and being available for a return to the team on November the 1st when we take on Newcastle.

Of course, it is infuriating that his actions have once again proved costly for Liverpool and that he isn’t available for fixtures he absolutely should be, but missing a total of 12 important games is far from the worst scenario envisaged.

Regardless of the behaviour of our number 7, he is one of the very best players in the world and for that reason it would be foolish to just give up with him and sell him.

Commercial reasons could yet dictate on that front, but if the club do continue to have a choice and a chance in keeping him at Anfield, sitting tight until November could well be a wise thing to do.

For all his faults, we know that Suarez can perform at the highest level for us. We know what we will get from him. There’s no guarantee that bringing in a replacement for him or signing another player for a big fee to take his place will work out the way Suarez has with us.

Brendan Rodgers is only going to add genuine quality to the squad and that will certainly make his team’s life easier coping without Luis than previous times.

And Suarez, despite ageing everyone else with his antics, is still only 27 and certainly has many great years ahead, if he can keep himself on track.

The ban could lead to a decrease in Suarez’s value also, and suitors Barcelona and Real Madrid could try to sign him on the cheap.

But Liverpool must absolutely not, under any circumstances, entertain offers lower than the value his football ability commands – a minimum of £75 million, unless they have to.

If this situation arises and interested clubs do try and exploit the situation, the club must keep him as there is no way Liverpool should suffer yet again for actions not of their own doing.

Ludicrous if he isn't even allowed to train & why #LFC are the ones who have to suffer most is beyond me.

On the other hand, even though Suarez has shown his world class ability over the three years he’s been on Merseyside, he’s also proved himself to be a liability.

Being unavailable for the first nine fixtures of the Premier League season will take Suarez’s total league games missed for us to 34, and the man has never received a red card in that time.

That is a damning statistic and really does beg the question whether Liverpool can continue with Suarez’s availability being so intermittent.

It seems, having committed this offence for the third time that our flawed genius doesn’t learn or perhaps doesn’t want to learn, which gives the staff and fans no assurances at all that something so incomprehensible stupid wouldn’t appear once more in the future.

Liverpool stood by him, backed him and put the clubs’ reputation on the line for him, which led to all manner of criticisms directed their way, but again he has done the unthinkable which may lead to the club giving up with him once and for all.

Fifa clarification on Suarez. He WOULD be able to transfer during his ban from football-related activity (hypothetically of course…) #LFC

Despite the ban it seems that Suarez would still be able to move clubs, which could be tempting if Liverpool do decide against standing by a player who has let them down again.

His outstanding ability would mean he would command the club a fee of around anywhere from £75-100million and that would provide Brendan Rodgers with an extremely healthy amount of money to reinvest in an evolving squad.

Rodgers’ side have also proved before that they are more than a capable team without the 27-year-old and perhaps more focus on the team collectively rather than one one man could once more bring out the best in other players in the team.

Luis Suarez has put Liverpool in yet another awful situation but as terrible it is, it could have been a whole lot worse.

For the player he is – the best I’ve ever watched – I am desperate for the club to keep hold of him as while he is a flawed genius, he is our flawed genius and I’d rather him return to action at Anfield than anywhere else.

Erring on the side of caution, washing our hands with him completely and replacing him is a dangerous game and gives us no guarantee at all that we will continue to improve the way we have the last 18 months.

By the same token, yes, it is a risk keeping hold of him, but it’s one worth taking.