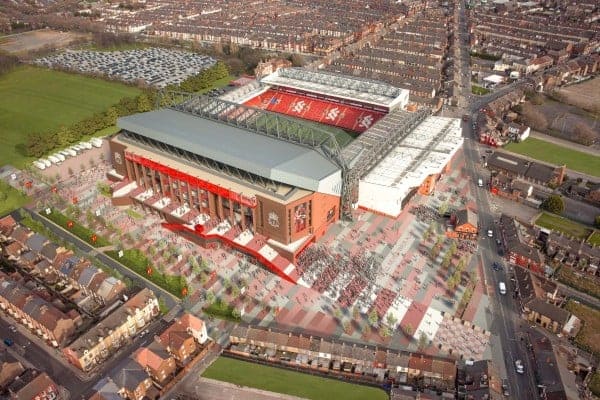 Liverpool officially submitted planning application for the proposed redevelopment of Anfield on Wednesday, which will eventually see the capacity increase to approximately 58,569. Liverpool say that the application is expected to be considered by the city’s planning committee later this year, with building work scheduled to start early in 2015 and the new Main Stand complete in time for the 2016/17 season.

That means, if all goes to plan, in two years’ time Anfield will have a capacity of just under 54,000 and stage one of the development completed.

The new Main Stand will feature a new Hillsborough memorial, a large open space and podium entrance and a second club shop. Inside it will see the club move into the 21st century with new media and corporate hospitality areas.

The second phase of the redevelopment will see the proposed plans for a redeveloped Anfield Road Stand, taking it’s current capacity from 9,074 to 13,860 and the overall stadium capacity to circa 58,000.

The planning application includes the option for 8 apartments in the upper level of the stand, or alternatively commercial space.

The capacity will not be affected while works take place at the stadium at any stage.

The eventual plans will see Anfield Road itself become pedestrianised and closed off, while the fences surrounding Anfield will be removed to create open spaces.