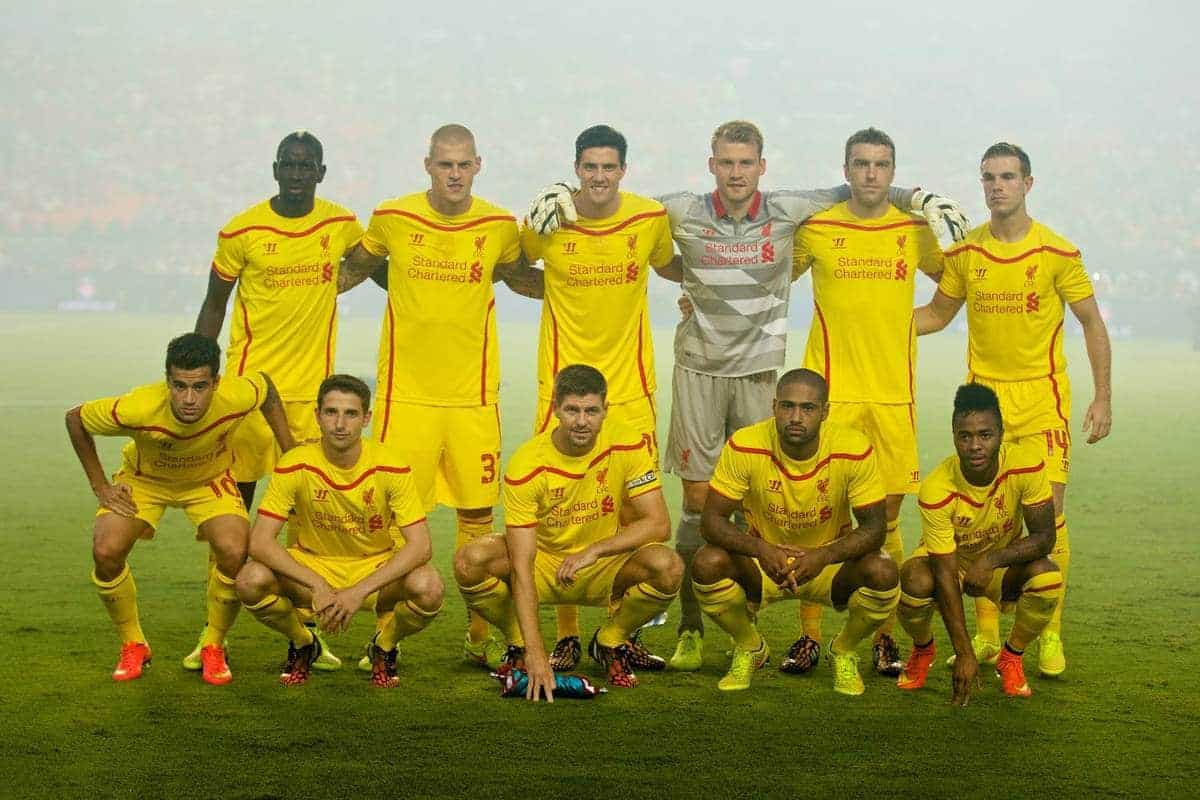 Liverpool lost 3-1 to Manchester United in the final of the International Champions Trophy. Henry Jackson rates on each Reds player on the night.

The 26-year-old could do nothing about any of United’s goals, and was solid when called upon, especially from crosses.

Kelly still looks rather limited following his injury woes, but he had a fairly decent game against tough opposition.

The 24-year-old supported the attacks well, and fired one ambitious effort wide.

Skrtel was more unnoticed than Sakho at the heart of the defence, but he was largely solid throughout. He could have done better for Rooney’s goal, however.

The 24-year-old was superb until he was replaced with 17 minutes remaining (due to fitness, this being pre-season after all). One of the Reds’ best players on the night.

He made a vital early challenge to deny Javier Hernandez, and his dominance in the air and passing accuracy were also very impressive.

Having endured some very poor displays of late, Johnson was better, if far from perfect, against United.

The 29-year-old got forward well from left-back, but he was guilty of running into trouble at times and looking typically lackadaisical in possession.

The skipper was slightly reckless in the tackle, giving away several needless free-kicks, but his distribution was as good as ever.

His nerveless penalty gave Liverpool the lead in the first-half.

The Welshman was quiet during his 61 minutes on the pitch, not doing anything wrong but also failing to influence proceedings like he did against AC Milan at the weekend.

Having enjoyed an excellent pre-season, Henderson was fairly quiet by his high standards. He never stopped running and his passing was good, but he just struggled to have his usual influence on proceedings.

The brilliant Brazilian was an absolute joy to watch at times, producing moments of superb individual skill and creativity.

His link-up play with Sterling was extremely promising, and you can’t help but feel the 22-year-old has a big season ahead of him, injury permitting. It has not been a good start to Lambert’s Liverpool career, and he was the one player who looked completely off the pace.

The 32-year-old’s touch was heavy, and his lack movement caused United’s defence few problems. It’s far from panic stations, but he needs to improve.

Along with Coutinho, Sterling was Liverpool’s outstanding performer on the night.

The 19-year-old showed electrifying pace, quick feet and a good work-rate, and outlined exactly why he is one of the most exciting young talents in Europe.

The 27-year-old didn’t add much to the side when he replaced Gerrard, but he was solid and unspectacular as ever.

Can has been a big positive so far this summer, and although he didn’t do a huge amount when he came on, he brings extra pace and power to the midfield.

The 18-year-old was very lively when he came on, taking players on and adding a spark that was lacking in attack when Lambert was on the pitch.

Wasn’t involved enough to have an impact on the game.

Not enough time to affect the game.

Who was your star man for Liverpool in the loss to Manchester United? Let us know in the comments section below.