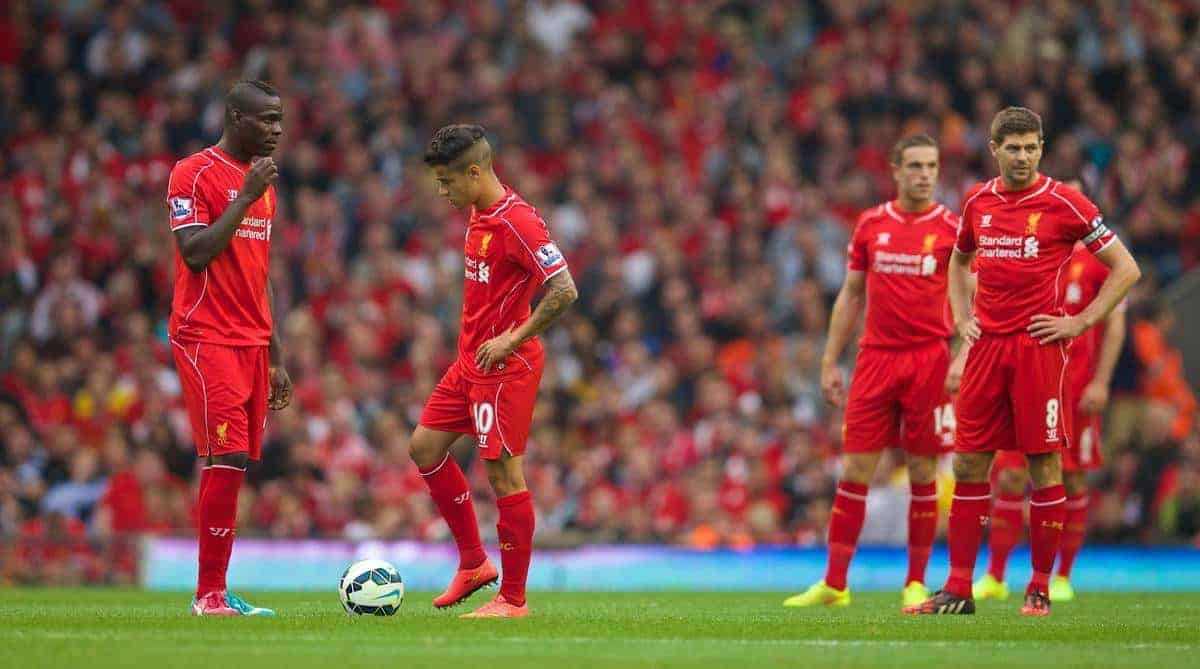 Liverpool succumbed to a hugely disappointing defeat at the hands of bogey side Aston Villa, with Gabriel Agbonlahor’s early goal the difference between the two sides at Anfield.

There were four Liverpool players in the starting XI who were given their home debut by Brendan Rodgers, with Alberto Moreno, Adam Lallana, Lazar Markovic and Mario Balotelli all making their Anfield bows.

Lallana and Markovic replaced Raheem Sterling and Daniel Sturridge from the side that beat Tottenham 3-0 two weeks ago- the former was rested and the latter was injured- while Philippe Coutinho came in for the stricken Joe Allen.

Markovic had the first attempt of the game, firing a volley over the crossbar following good work from Moreno. The young Serb then headed wide, but Balotelli was in a prime position to put the Reds in front had he left it.

It was the hosts who took the lead, however, following a positive start. Gabriel Agbonlahor capitalised on some poor defending from a Villa corner, particularly from Dejan Lovren, poking his side into a 9th-minute lead. More shocking defensive work should have led to Philippe Senderos making it 2-0, but the former Arsenal man headed over when completely unmarked.

There was a flatness about Liverpool’s display, with endless corners given away and a spark lacking without Sterling and Sturridge in the side. Senderos was extremely lucky to stay on the pitch after a blatant trip on Balotelli which referee Lee Mason failed to spot.

Rodgers’ men continued to enjoy more of the ball around the half-hour mark, but barring a blocked effort by Lallana, more often than not their patient passing led to no chances created.

The game continued in a similar pattern for the remainder of the half, and although Lallana and Balotelli both fired efforts wide of Brad Guzan’s post, Paul Lambert’s side took a deserved 1-0 lead into the interval. A huge improvement was needed.

The Reds were unchanged when they emerged for the second-half, as they looked to overturn the first-half deficit. It was a positive response, with the passing more crisp and the atmosphere more passionate.

Sterling’s introduction after 60 minutes was met with great joy by the Liverpool faithful, but Villa continued to be extremely tough to break down. The 19-year-old fired over from range, but it was as close as Rodgers’ men came to levelling as the final quarter of the game loomed.

Balotelli and Markovic made way for Rickie Lambert and Fabio Borini, as Rodgers tried to freshen things up, but that elusive goal just would not come.

It so nearly did, as Coutinho’s wonderful effort with 10 minutes remaining came back of the post, and Sterling drove the rebound straight into Henderson.

The game petered out in its final moments though, and Villa sealed yet another good win at Anfield. It was a deeply disappointing day on Merseyside.

Rodgers opted for a 4-2-3-1 formation rather than the 4-4-2 diamond used so effectively of late, with Coutinho deployed in the No. 10 role and Lallana and Markovic supporting Balotelli on either flank.

With several new players in the side, however, the team often looked disjointed. Balotelli and Lallana clearly lacked match sharpness, while the relationship between Lovren and Sakho often left a lot to be desired.