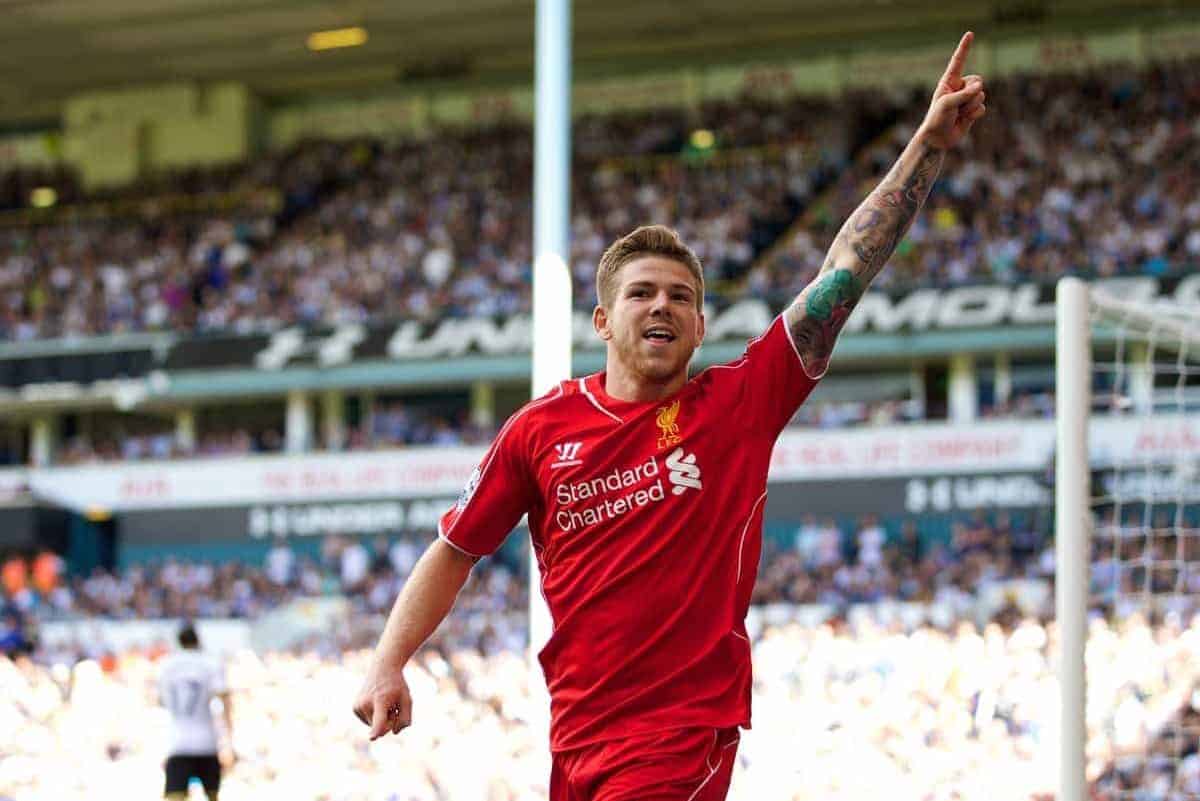 He made a mistake under pressure away to the Premier League champions and slipped on some astroturf that is dangerously close to the pitch, but the consensus was that Alberto Moreno looked a decent enough player after his Liverpool debut against Manchester City last week.

Then on Sunday afternoon against Tottenham he took that view and smashed it to pieces — he’s not decent, he’s much better than that.

As Simon Collings pointed in his article shortly before Moreno signed for the Reds, Liverpool have been short of a first class left back since the departure of John Arne Riise in 2008. Moreno could be the man to fill that void. Like any 22-year-old he has flaws in his game that need work but the Spaniard brings pace, energy and good delivery from the flank. Plus he can hit a football really hard.

He might not be in Riise’s league when it comes to thumping the leather off a ball but he showed on Sunday that he’s not afraid to take a shot on. He didn’t shy away last season either as he scored a goal each vs Real Vallodolid, Athletic Club and Barcelona, all with thumping left foot drives.

Moreno’s tackling is an area where he will need to improve but don’t forget that his fantastic solo goal against Tottenham came from his dispossessing Andros Townsend one-on-one.

The Spaniard has signed a five-year contract with the club and Brendan Rodgers’ plan is for Moreno to become a key part of his high intensity Liverpool lin-up. Moreno’s suitability to the philosophy of Rodgers is there for all to see — he has electric pace and the skill to utilise the ball at speed, key ingredients in any potential Liverpool player.

Moreno left his hometown at the relatively young age of 22 to move to a foreign land and he appears to have settled well. His goal celebration at White Hart Lane certainly indicated that he already has an affinity with the Liverpool fans, who have taken to the Spaniard not least because of his remarkable resemblance to a Steven Gerrard – Xabi Alonso love child.

Moreno’s ability to deliver mouth watering crosses will present an even greater threat to opposing defences with the much heralded arrival of Mario Balotelli. The Italian international is 6”2 and with Daniel Sturridge standing 6”0 Moreno will have two fantastic targets to aim for when swinging in balls from the left flank, if Rodgers plays the two strikers together as he did against Spurs.

Liverpool have options at left back with Jose Enrique, Jon Flanagan and even Glen Johnson all capable of playing there, meaning that Moreno is under pressure to keep his performances at a high level. But judging by his showing for the Reds so far, it’s Moreno’s spot to lose.

It’s still early in his career but it looks as though Moreno could be the answer to Liverpool’s long standing problem at left back.