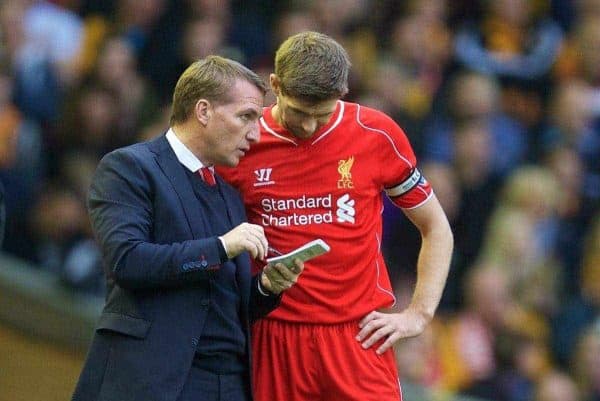 With Liverpool currently in the midst of a run of eight games in 21 days and with trips to Newcastle and Real Madrid within the next week, Jack Lusby takes a look at five players who need to be rested for the League Cup clash with Swansea on Tuesday night.

While the League Cup is hardly highest of priorities, this may represent Brendan Rodgers with his easiest route to European qualification amidst a rough and congested 2014/15 fixture list.

Offering up his previous employers Swansea City for the Fourth Round tie on Tuesday night, the competition adds further impetus for the Northern Irishman to go for the jugular at Anfield; the Welsh side defeated Rodgers’ Reds 3-1 in the cup in 2012.

Despite this, Rodgers must be wary that several of his players are in dire need of a rest, and the League Cup affords him the opportunity to field some of his fringe players and still hope for a result.

Furthermore, this rest period would allow some of Liverpool’s key players additional time to prepare for the upcoming double-header away to Newcastle United in the Premier League and Real Madrid in the Champions League.

Here are five players who need a rest against Swansea on Tuesday night.

Liverpool captain Steven Gerrard has played the joint-highest amount of minutes for Rodgers’ side so far this season in the Premier League, according to WhoScored, completing the full 90 in all nine games—all this whilst struggling to find consistent form.

The Reds manager recently claimed that Gerrard may be offered the opportunity to rest in lower-profile fixtures, saying:

“He is at the age where we need to treat him individually. We want him to be involved in the big games because of his experience and we will always taper that recovery to allow him to be at the very best he can be.”

Tuesday night’s Capital One Cup tie would offer Gerrard the chance to rest and prepare for big games away to Newcastle and Madrid; Jordan Henderson should provide the requisite authority in his absence in midfield.

The obvious name when it comes to the subject of rest for Liverpool this season is 19-year-old Raheem Sterling, who endured the recent infuriating ‘tired’-gate whilst away on international duty.

Words bubbling from the mouth of England manager Roy Hodgson reportedly never came from that of the teenager, according to teammate Glen Johnson, but nevertheless Sterling could do with a rest in this instance.

Sterling is one of the most important players in Rodgers’ squad and, in the absence of Daniel Sturridge and with Mario Balotelli currently struggling for form, is perhaps the most regularly relied upon attacking option at this juncture.

Against Swansea, Sterling should find his place on the substitutes’ bench at best—Rodgers has able deputies in Lazar Markovic, Fabio Borini and Philippe Coutinho.

Like Gerrard, Croatian centre-back Dejan Lovren has played every minute for the Reds so far in the Premier League—whether for better or worse, the 25-year-old is now Rodgers’ first-choice central defender.

However, the summer signing has so far struggled to settle in to his role on Merseyside, particularly failing to assume the leadership duties earmarked for him on his £20 million arrival from Southampton.

On the field, too, Lovren has looked erratic and uncomfortable, struggling to form a partnership with Martin Skrtel at the heart of the back four.

With Kolo Toure waiting in the wings, perhaps it is time to give Lovren a rest in order to recuperate and come back stronger.

In keeping with the sloppy defensive theme, Belgian goalkeeper Simon Mignolet has come under as much criticism as Lovren in recent weeks, and the Reds were all set to sign free agent Victor Valdes until talks became complicated by the player’s demands.

This leaves Australian custodian Brad Jones as Mignolet’s deputy and, against Swansea, the Liverpool No. 1 should be included in order to give the former Sunderland man a breather.

Jones is far from the level of competition required to challenge Mignolet on a regular basis, but his performances in cup competitions in the past have been comfortable if unspectacular.

The 32-year-old should start, and give Mignolet 90 minutes away from the spotlight.

Much like Sterling, summer signing Adam Lallana should come under consideration for a rest against Swansea due to the wealth of forward options available to Rodgers for this tie.

The Englishman has slowly come in to form for the Reds after a disappointing injury sustained in pre-season, and this was underlined by a great goal taken against West Bromwich Albion in the recent Premier League victory.

However, Lallana’s talents should be saved for higher-profile encounters and, with Coutinho shining in a cameo role in last weekend’s 0-0 draw at home to Hull City, his exclusion would not affect the Reds’ attacking play hugely.

In his six Premier League appearances so far, Lallana has averaged at just 69 minutes on the pitch, completing the full 90 just twice.

So soon after his return, the midfielder’s fitness needs to be managed carefully, and a rest would do Lallana a world of good.

Who would you rest for Liverpool’s Tuesday night Capital One Cup tie against Swansea City? Let us know in the comments below.