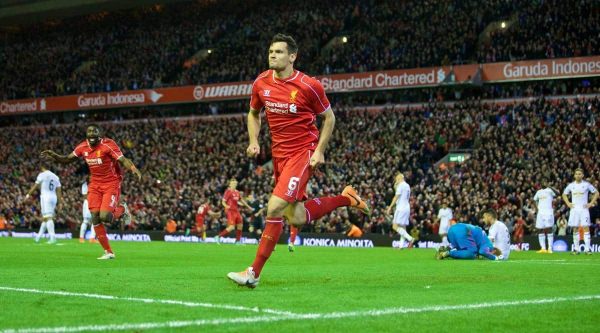 Liverpool 2-1 Swansea: Late Balotelli and Lovren goals get Reds through in League Cup

Liverpool beat Swansea 2-1 in their League Cup fourth round clash at Anfield, following a late comeback, as Brendan Rodgers’ side made it through to the last-eight. Mario Balotelli and Dejan Lovren got the goals in the final 5 minutes.

Reds boss Brendan Rodgers made nine changes to the side that drew with Hull on Saturday, with Dejan Lovren and Javier Manquillo the only players to keep their place in the team.

Brad Jones came in for Simon Mignolet in goal; Kolo Toure and Glen Johnson replaced Martin Skrtel and Alberto Moreno at the back; Lucas Leiva, Jordan Henderson and Philippe Coutinho started at the expense of Steven Gerrard, Emre Can and Joe Allen in midfield, while Rickie Lambert, Lazar Markovic and Fabio Borini started in place of Mario Balotelli, Adam Lallana and Raheem Sterling in attack.

Liverpool got off to a fairly decent start and dominated possession. Henderson, captain for the evening, sent a free-kick flying over the bar, Lucas’ shot tested Gerhard Tremmel and Coutinho fired wide. Former Red Jonjo Shelvey received an excellent reception from the home faithful when taking an early corner in front of the Kop.

Despite plenty of the ball, however, Rodgers’ men were not getting behind Swansea, with half chances the best the hosts could muster. Markovic had a terrific chance to open the scoring after 26 minutes, but the Serb sliced a poor attempt wide. In truth, it was a fairly dull affair.

Borini fired an effort wide of Tremmel’s right-hand post, in what was one of Liverpool’s better efforts on goal, and the 23-year-old Italian then forced the Swans’ keeper into a good save soon after.

Nathan Dyer shot wide just before the break and Shelvey’s free-kick was saved by Jones, as the visitors enjoyed a good period of dominance. At half-time it was goalless though, and it was all to play for after the interval. An improved game was much-needed.

There were no changes at the break, as both sides tussled for a place in the Capital One Cup quarter-finals.

The second-half started with a similar feel to the first, with Liverpool bossing proceedings. Coutinho tested Tremmel with a tame effort, but it had the feel of being a long night at Anfield.

Once again there was a lack of tempo about the Reds’ play, and the likes of Markovic and Lambert struggled hugely to stamp their authority on the game. Swansea were beginning to frustrate, and a change was needed by Liverpool in order to ignite their display.

Coutinho fired into the Kop, Bafetimbi Gomis had a soft penalty appeal denied, but after 65 minutes the Reds were behind. Marvin Emnes fired a terrific volley past Jones at the Anfield Road end, and Rodgers’ men had it all to do.

Johnson tested Tremmel immediately, as Liverpool tried desperately to remain in the competition. Lambert and Coutinho both forced the German ‘keeper into easy saves, but it was becoming more and more frustrating for the Anfield crowd.

Balotelli replaced the former Southampton man with 11 minutes remaining, as the Reds looked for a late equaliser. The Italian did the business with just five minutes remaining, finishing clinically from Borini’s excellent cross. It was the 24-year-old’s second goal for the club.

Federico Fernandez was harshly sent-off in stoppage-time after a challenge on Coutinho, and the Reds snatched the win with virtually the last kick of the game. Lovren headed home from a free-kick after Tremmel misjudged the ball, sending Anfield wild.

The sense of relief around Anfield was palpable, after going almost 300 minutes without seeing a goal.

Rodgers opted for the 4-2-3-1 formation, with Markovic on the left, Borini right and Coutinho in the No.10 role. Lambert started in place of Balotelli up front. Late changes for Lallana and Balotelli were like-for-like.

The first half saw the front three attacking midfielders interchange nicely but struggled in the second half.