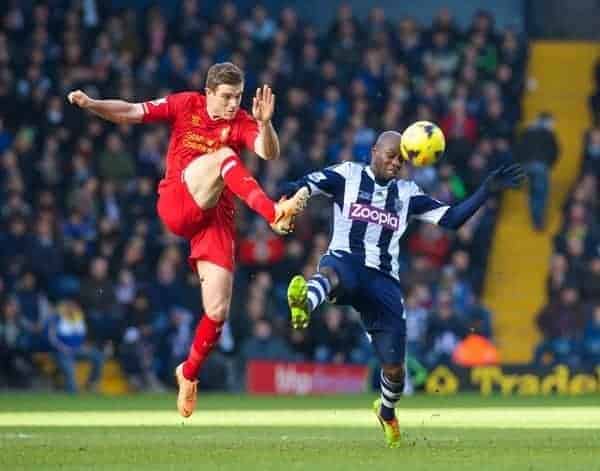 After midweek disappointment in the Champions League, focus on the training ground switches swiftly back to the Premier League. Following a disappointing display against Basel on Wednesday night, Brendan Rodgers will know the psychological importance of heading into the international break with three points in the bag.

Here we analyse the data for this week’s visitors to Anfield, West Brom, to identify the keys to the match for Liverpool ahead of Saturday’s clash.

Time to sharpen up It’s no secret that Liverpool have struggled in front of goal recently, and with Daniel Sturridge still an injury doubt, all eyes will fall on Mario Balotelli.

The Italian has endured a frustrating start to life on Merseyside and his statistics don’t make pleasant reading. Balotelli is certainly trying: averaging a shot every 16.2 minutes in the Premier League – more often than any other player. Unfortunately, despite his obvious desire to impress, his accuracy is lacking, standing at just 25 per cent on target.

That wastefulness has contributed to Liverpool recording an average of 11.6 shots for each league goal scored – more than all but four other Premier League sides.

He who dares, wins If West Brom’s defence is impressive for stifling their opponents’ opportunities, it’s perhaps no surprise that teams are choosing to try their luck from distance. Alan Irvine’s side have conceded four of their seven goals from outside the penalty area –double that of any other side.

This weakness in West Brom’s armour should alert the aforementioned Balotelli, who has hit 60% of his 20 efforts from long range since joining. To those sitting in the Kop – you have been warned!

Keep them at a distance New centre-back pairing Martin Skrtel and Dejan Lovren continue to develop a partnership in the heart of defence and will need to work closely together if they’re to avoid a repeat of the situation that allowed Marco Streller to pounce from close range for Basel in midweek.

Alan Irvine’s team have scored three headers – the joint-most in the Premier League and only Chelsea have netted more from within the 6-yard box.

There is a silver lining, however. A main component of West Brom’s threat from wide areas – and their defence – Andre Wisdom, is unavailable due to the terms of his loan. With only Chelsea having more assists from crosses this season than the Baggies, Wisdom’s absence could strip them of their most potent threat.

A string of disappointing performances has elevated the importance of taking three points from this tie. For the first time in a long time, Brendan Rodgers’ side are under scrutiny and in desperate need of both a result and a confident performance. West Brom will arrive at Anfield on a high, but their tendency to come undone from long distance could set the stage for Super Mario to finally find his range.