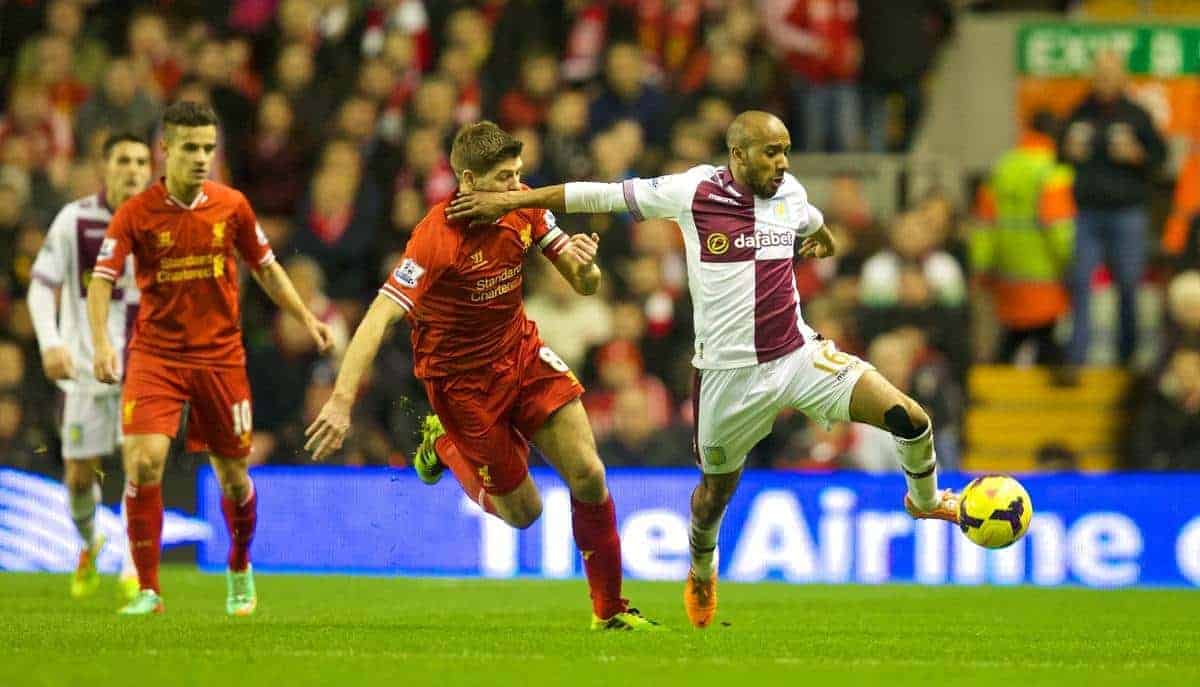 With Fabian Delph linked with a move to Liverpool this week, Jack Lusby finds five free-agent midfielders that the club should consider instead of the Aston Villa midfielder.

Reports this week have linked Aston Villa midfielder Fabian Delph with a transfer to Liverpool, with the England international set to run his contract down, according to The Telegraph.

John Percy writes that Delph “has told Aston Villa he has no plans to sign a new contract and is set to leave the club in the summer.

“Delph appears poised for the Villa exit on a free transfer at the end of the season, in a move which is likely to spark interest from Merseyside rivals Liverpool and Everton, plus Tottenham Hotspur.”

Delph is far from a poor player, as this recent comparison with the previously-linked James Milner shows:

Combative, direct and comfortable in possession, the Villa man would suit one of the roles assumed by players such as Jordan Henderson, Joe Allen and Emre Can in Brendan Rodgers’ diamond midfield formation.

However, considering the depth the Reds possess in those central midfield roles, this is not necessarily the type of signing Rodgers should be looking to make, cut-price or not.

Adding Delph to the squad would fail to address the gulf in central defensive midfield, with Lucas Leiva’s powers diminishing rapidly along with the waning Steven Gerrard.

To bolster their attacking might, Liverpool need to add a genuine midfield destroyer. Assessing the success of Southampton this season, with a midfield screen of the exceptional Victor Wanyama and Morgan Schneiderlin, underlines the importance of such a player.

If Liverpool are looking to dip into the free agent market in the near future, there are a plethora of great defensive midfield options in the last year of their contract.

Here are five defensive midfield options that Liverpool should consider over Delph in the free agent market.

All contract information courtesy of Transfermarkt, and statistics courtesy of WhoScored.

The obvious and most suitable choice — and perhaps the most unrealistic — stands as Real Madrid and Germany powerhouse Sami Khedira.

Khedira has reportedly been training with the Madrid reserves alongside fellow defensive midfielder Asier Illarramendi ahead of a January move from the La Liga side, and has been linked persistently with a move to the Premier League, with both Arsenal and Liverpool regularly mooted.

A dominant defensive talent with a devastating ability to scythe through opposition midfields with power, Khedira is the ultimate, cultured ball-winning midfielder available in this market.

Having only made four substitute appearances in the league so far, with a further cameo role in the Champions League, Khedira should be looking for a move away from Carlo Ancelotti’s side either in January or at the end of his contract.

Central to Germany’s success in this year’s World Cup, Khedira would be the perfect signing for Rodgers’ midfield, although would surely command a high wage.

Having joined the struggling outfit from Manchester City in the 2012 summer transfer window, De Jong has become an integral member of the Milan squad due to his defensive steel and quality in possession.

Furthermore, having already played for City in the Premier League, the Dutchman wouldn’t struggle to adapt to the pace of English football.

At the Etihad, De Jong served as Roberto Mancini’s defensive pulse, and one of the side’s most important players.

Having made nine Serie A appearances so far this season, along with two goals scored De Jong has made an average of 1.9 tackles and a phenomenal 4.3 interceptions per game, outlining the midfielder’s talents as a decisive and perceptive reader of the game.

At 29 years old, De Jong has plenty of years left in the tank, and could make an astute signing for Liverpool.

French defensive rock and silver fox Jeremy Toulalan has plied his trade across several of Europe’s finest clubs throughout a successful career and, still at just 31 years old, would serve as a fine potential replacement for a player such as Lucas in the Reds midfield.

Currently at Ligue 1 side AS Monaco, Toulalan can operate as both a defensive midfielder and as a central defender.

So far in nine league games, the No. 28 has averaged 4.9 tackles and 2.2 interceptions per game, and has performed to an even higher standard so far in the Champions League.

Lars Bender has won 13 tackles in the Champions League this season. Only Jérémy Toulalan has managed more (15). pic.twitter.com/T7Zt4BJWh9

The only real issue with signing Toulalan is the midfielder’s temperament but, those misgivings aside, would be an important player in this Liverpool squad.

Monaco have an option to extend Toulalan’s contract by a further year, so Rodgers may have to act and offer the side a transfer fee in January in order to secure the Frenchman’s services.

On to another Frenchman, and Arsenal’s Mathieu Flamini sees his contract expire at the end of this Premier League season, and a move to the Gunners’ top-four rivals could be a positive signing for Rodgers.

Added to Arsene Wenger’s squad at the beginning of last season, the 30-year-old returned to North London to provide some much-needed steel to the Arsenal midfield.

Now, the former Milan man could do the same job on Merseyside.

A combative talent, who takes care of defensive duties alongside deep-lying playmaker Mikel Arteta, Flamini is a diligent and composed midfielder who would serve as a fine shield for Liverpool’s shaky defence.

So far this season, in eight league appearances, Flamini has averaged three tackles and three interceptions per game; rarely roving forward, these serve as the midfielder’s primary output.

Rodgers could well do with a player of Flamini’s ilk for the short-term and, while domestic rulings mean a pre-contract agreement cannot be arranged, a January move would bolster the Reds’ weak defensive ranks.

Quite possibly the most likely option here, given Liverpool’s interest in lower-level players such as Delph, is West Bromwich Albion midfielder Youssouf Mulumbu.

The Congolese international, signed from PSG following a successful loan spell in 2009, has fallen out of favour at the Midlands club following the arrival of new manager Alan Irvine.

However, in five league appearances so far this season for the Baggies, Mulumbu has made an average of 3.2 tackles and 2.8 interceptions per game, and it is the No. 21’s ability to read the game and make interceptions that truly stands out.

Mulumbu still stands as one of the Premier League’s best pure defensive midfielders, and the 27-year-old could offer the Reds an economically-sound, low-risk option either in January or in the summer.

Perhaps Rodgers would be wise to look across to Villa’s current rivals instead, as either Mulumbu or fellow West Brom midfielder Claudio Jacob would be solid free-agent signings for the Reds.

Which free-agent signing should Liverpool make over Fabian Delph, if any? Let us know in the comments below.