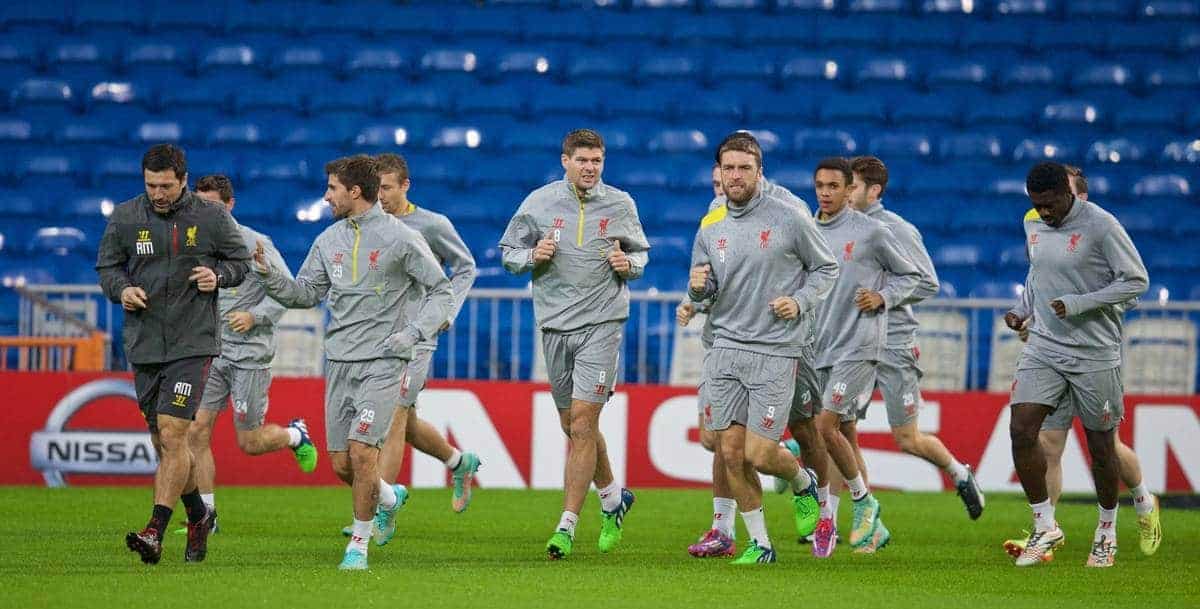 Liverpool head to Madrid to take on Spanish giants Real in their fourth Group B game of the Champions League on Tuesday night with qualification still firmly in their own hands. Ben Twelves discusses the team selection options available to Brendan Rodgers.

Brendan Rodgers’ Liverpool continued their struggling start to the season on Saturday suffering a dreadful defeat at Newcastle United, and the challenge doesn’t get any easier on Tuesday night as the Reds head to Spain to take on Real Madrid in the toughest fixture they’ll face in years.

It could be a case of just keeping the score-line respectable in the Spanish capital as thoughts of picking up any form of result border on insanity, but it’s a chance for the Reds to play freely knowing that the conclusion of the fixture changes nothing where progressing to the next stage is concerned.

The first meeting at Anfield close to two weeks ago was a complete football lesson – only after an even first 20 minute spell had passed without a goal – and the Reds know what to expect when they meet on Tuesday. However, despite knowing full well what they’re coming up against, it seems almost impossible to stop Carlo Ancelotti’s dream team who would qualify for the knockout stage with a victory.

One positive going into the tie is that no matter what the result is on the night, qualification remains firmly in Liverpool’s own hands, so Brendan Rodgers has an interesting team selection dilemma ahead of him for a game that isn’t necessarily as important as first thought.

Rodgers has two potential choices ahead of the match namely playing a strong side in the hope it sparks his team into life, or naming a changed XI and resting key players ahead of the weekend fixture with Chelsea. Whichever option the Ulsterman decides to go with, it must finally see a move away from the rigid 4-2-3-1 that is crippling the team and contributing heavily to the abject displays currently on show.

No new names have been added to the injury list, meaning Jose Enrique, Jon Flanagan, Mamadou Sakho and Suso all remain unavailable for selection, with an improving Daniel Sturridge unlikely to be ready for action as Rodgers has confirmed the whole squad have travelled for the trip.

Significant news emerged on Monday night that Rodgers is considering resting Steven Gerrard for the clash, something long discussed within the clubs’ fan base, and his likely exclusion demonstrates the much awaited realisation that the Captain needs more careful management as he enters the final chapter of his incredible career.

Rodgers spoke in his pre match press conference about energy in midfield. Makes sense he'd drop Gerrard in all honesty.

As a result, Emre Can, Joe Allen, Jordan Henderson and Philippe Coutinho are all contending for a starting berth in the midfield slots, with Lazar Markovic and Adam Lallana ready and waiting for a chance should Rodgers choose to make more rotational changes to his team.

In contrast to the middle of the park, the back line that is supposed to form the Liverpool defence could remain unchanged, with only Javier Manquillo a likely candidate to come into the team in place of the consistently under-performing Glen Johnson.

Kolo Toure dropped back to the bench after a solid game against Swansea last week, despite it being the ideal opportunity to remind Martin Skrtel and Dejan Lovren they need to be performing in order to keep their places, meaning a return to the XI seems unlikely for the Ivorian.

The disjointed Reds attack continues to frustrate but with Sturridge unlikely to play despite travelling and other options underperforming, there’s not too much that can change – other than either supplying Mario Balotelli with a strike partner or a change of system that sees Liverpool operate without the Italian.

With Mignolet in goal and changes a genuine possibility, Manquillo should come back into the side at right back with Toure coming into the starting XI alongside Skrtel and in place of Lovren, who continues his woeful start to life since arriving on Merseyside, alongside Alberto Moreno at left back.

An interesting selection awaits in midfield, and Gerrard’s absence would allow for the high energy team that Rodgers spoke about in his pre-match press conference to take to the field and that should see Allen, Can and Henderson in a three man centre.

A three man attack should therefore be deployed, with Sterling as a central figure and Lallana and Coutinho either side making up a flexible, unpredictable and dynamic forward line and Liverpool would look like this: If choosing to stick with the 4-2-3-1 formation and should the Reds boss make more changes as speculated, Can and Allen could play as the mobile two man midfield with Lallana, Coutinho and Markovic as the three behind Balotelli. That would see Liverpool look like this: If Rodgers does decide to keep Gerrard in the side however, he should do so by playing a diamond which should see Liverpool line up like so: Meanwhile, this is the rumoured lineup today, featuring Rickie Lambert up front: It’s a game that not even the staunchest Red will be expecting a result from, but that factor could work in Liverpool’s favour with the job still all to do in the final two games of the group to come.

Henderson: "We feel like we have more than enough quality to get out of this group"

The Reds should play with no fear in an attempt to find a solid performance, and if an unlikely result was to come as part of a brave display in Madrid, it could be just the lift the squad needs to turn the disappointing season so far around.