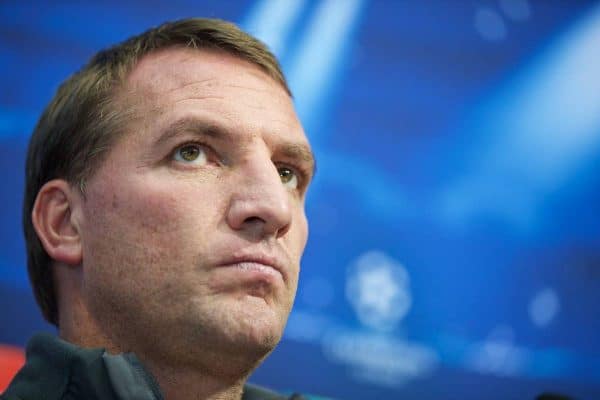 Liverpool travel to Bulgaria for their fifth game of a disappointing Champions League campaign to date. Brendan Rodgers is likely to make changes to his side for the fixture. Ben Twelves discusses some of the options available.

Rodgers’ Liverpool have the chance to move on swiftly from the weekend’s dreadful result and performance when they travel to Sofia to take on Ludogorets Razgrad in a crunch clash as the Reds look to hang on to their Champions League status.

A win is needed to keep any realistic qualification aspirations alive, though a defeat wouldn’t necessarily see Liverpool exit the competition either. However a fifth straight loss for the first time in over 60 years would certainly make qualification extremely improbable in the final group stage match, as well as failing to stop the desperate run of form.

In a season of low points, Rodgers’ side reached arguably their lowest ebb to date on Sunday afternoon following the woeful defeat, and surely from this position the only way the team can move is forwards.

It was a truly hideous display in London with the fixture producing the same old problems and yet again the same players underperforming. It’s becoming tedious viewing, and Rodgers must act before he pays the price for the poor performances and results with his job.

It is the Liverpool manager’s failure to address the recurring issues that has helped place the team in this messy situation and one thing for sure is that it can no longer be tolerated, meaning failure to make changes to his team now would signify a simple display of ignorance.

Any sign of persistence with those letting the team down and lack of change in approach could be enough to raise serious question marks over his Anfield future, and starting on Wednesday, Rodgers must show he recognises the issues by altering his team.

In theory, Wednesday’s team selection should be the easiest of the season for Rodgers such was the abysmal performance level of most of his side on Sunday.

The Liverpool manager must drop all of Dejan Lovren, Martin Skrtel, Glen Johnson and Steven Gerrard as their performance levels continue to fall at alarming rates, and the four of them should be replaced in the starting XI as best as alternative options allow.

Good news is that Mamadou Sakho has returned to training but as the game has to come too early for the Frenchman to be inclued, only Kolo Toure is a genuine option to come in at centre back and therefore one of Lovren or Skrtel looks set to keep their place. However, there’s an easy decision for the Liverpool boss as Johnson should be replaced at left back by Alberto Moreno.

In midfield, Gerrard ideally has to make way, and Emre Can is available to come in to the side as well as Jordan Henderson who is now back after illness kept him out of Sunday’s encounter, and Rodgers has little excuse to persist with the captain with a case for both players to come in to the starting team.

Raheem Sterling looks to be affected by the pressure of the team’s poor form and the lack of attacking threat alongside him, but with the game being of such importance, Liverpool need their match-winners on the pitch. A goal on only his second start should see Rickie Lambert continue up front in the absence of Daniel Sturridge and Mario Balotelli who will miss the trip through injury.

The Line Up – Toure and Lucas Start

Reports suggest that Toure and Lucas Leiva are set to make a welcome and deserved return to the team, and in the diamond formation that saw Liverpool at least head in level at half time against Crystal Palace – this is how Liverpool should look for the clash:

Alternatively, Rodgers could play a more creative team as his side realistically need to win the game and that could see The Reds line up like this:

However, Lucas’ inclusion is likely to see Gerrard moved into a more advanced role, and with this in mind, I expect Rodgers to pick his team as something like this tomorrow night:

Even though defeat on Wednesday night wouldn’t necessarily see Liverpool eliminated from the prestigious competition, Brendan Rodgers and his struggling team must begin to make life easier for themselves to prevent the current mess of a situation becoming any worse.

Rodgers: We will keep fighting and working in the belief that the honesty and commitment of the group will get us the results. #LFC

It will be a tough fixture in a hostile atmosphere for The Reds, but both management and players have to stand up, take responsibility and be counted to work together to turn fortunes around – starting with avoiding an embarrassing and record equalling defeat in Sofia.